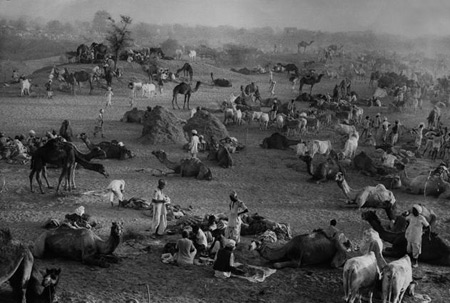 French photographer Marc Riboud demonstrated his zest for examining the lives of ordinary people in far away places decades before “through the back door” travel adventures became the rage. Beginning in Paris in the mid-1950’s and working his way through Asia over the next decade, Riboud captured the unexpected along with what has become famously familiar, iconic imagery. Yes, his lovers kiss beneath the arches of Pont des Arts in Paris. And the classic baguette carrier makes an appearance. But we see here that Riboud also repeatedly veers away from sweet sentimentality and the expected. He rescues his gelatin silver print of a circle of smiling schoolgirls dancing in the Jardin des Tuileries by choosing to extend the frame of his composition to include the lonely child isolated in the right foreground.

In his “Painter of the Eiffel,” Riboud puts contrasting values to work, suspending a laborer, dancing like Fred Astaire, within a dark, riveting, modernistic foreground of welded forms, silhouetted against a diffused grey background of established architecture from an earlier age. Pushed to its extreme, a similar combination of dark on light performs exceedingly well in Riboud’s snow covered “Forbidden City, Beijing, China.” The photographer’s curiosity about people is apparent in his studies of children at school and play in China, Pakistan and Russia. Scenes that once were an accepted part of community life, including Riboud’s engrossing overview of the camel market in Nagaur, India, have often, more recently, evolved into events staged for tourists. Riboud’s insightful acknowledgment of his own trade’s inclusion of the element of staging is evident in his shot of a Chinese street photographer who lifts his clients up out of a grungy Beijing alleyway by posing them in front of a staged background of an aggrandized temple square.