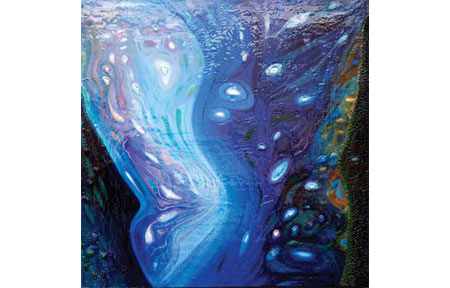 When Scottish-born artist Paul Gardner came to the USA, he was bowled over by the scenery of the Southwest and, completely on his own, without artistic mentors or models to depend on he began a series that at first appeared three-dimensional and scientific rather than artistic. For two decades Gardner has been seeking to translate the endless and varied compositions of the planet using actual soil, different types of paint, glass, stones, and assorted objects that portray earth, wind and fire, terrain, water, river rocks, and tide pools. Entitled “Elements,” this retrospective proves that persistence pays off. Gardner transformed his European training to realize his goal of finding ways to reveal how the earth is itself a work of art. In the process of continual exploration and never losing sight of his goal, the work has moved from being geological to distinctly aesthetic, a new form of landscape. As the exhibition is hung chronologically by series, it is evident that his latest work is remarkable. Where once he worked cautiously, treading slowly in new territory, he now applies paint and assorted media with expertise and assurance. Gardner shows, in his current output, that he is on to something very special, an originality that is nothing less than breathtaking.