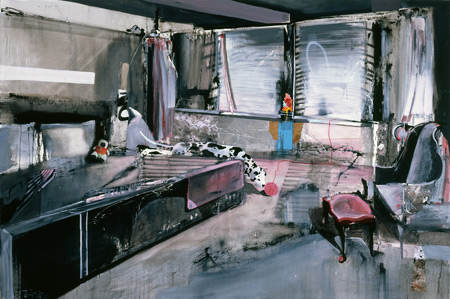 Marcus Jansen spent his early years in the Bronx, served in the first Gulf War and was educated at the Berufsfachschue fuer Gestaltung/Design in Europe. He was diagnosed with PTSD and began painting as a means of therapy. Jansen explores urban landscapes in discomfiting ways and shows us the things many of us would prefer to ignore. The angst he conveys is given heft via his extraordinarily raw techniques. For instance, he uses exterior house paint and rubs it until it hums with the oddly seductive allure of a fouled-up city. His depictions are so dire that they make us long for redemption. One work, “Dog House” utilizes a grayish palette that resonates with subterranean grief — a dog, a ragged red stool and an elongated bench are all smudged and resonating with a sensibility so grim it becomes mesmerizing. The room is locked and loaded — and will literally blow your mind.

Another piece, “Over the Border,” is equally unnerving. It’s the dismal flipside of a carnival arcade. Rabbits are lined up with targets on their sides. They travel over a brilliant blue ravine with a discarded tire floating in it. It’s a haunting landscape that makes it clear why Jansen is now being hailed as the Father of Modern Urban Expressionism. Not bad for a guy who used to hawk his paintings on New York street corners. Go, go, go see Jansen’s work. Some have described it as a new iteration of the Ash-Can School. It’s that and more.