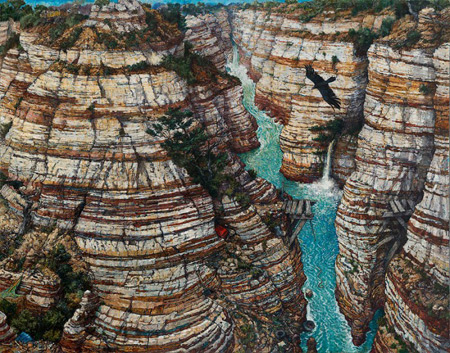 The miner, the tools and residue of his life, and the world he inhabits are the focus of Chester Arnold’s newest body of paintings, both grand (78 x 94 inches) and small (8 x 10 inches). As in his previous work, Arnold applies earthy tones in frequent and fluid strokes, creating scenes that are at once frenetic and enchanting; think moody Van Gogh meets the pointillism of Seurat.

The works, though always representational, can almost break apart. An example is “Miner’s Life #1,” which features a mining tunnel littered with the detritus of the miner and low-tech tunneling infrastructure. Details reveal themselves slowly as man-made or man-built objects initially blend into the landscape. The gritty earth envelops and swallows man up (to that end, two other works actually feature the half-buried skeletons of miners). In other works, such as the breathtaking “Grubstake,” which takes a point of view from above a raven soaring over a deep, narrow river valley, we see mere hints of the miner’s activity far below. Arnold makes the image tight and dramatic, its mood light and glorious.

Further adding to the dynamism of this show are the engrossing compositions — deep canyons, no-end-to-be-seen mine shafts sunk deep down into the earth — and changing perspectives — from god-like high-in-the-sky vantage points to the eye-level of a small animal. Together then, the show is an epic journey, both visually and emotionally, from the heavens to the bottom of the world.