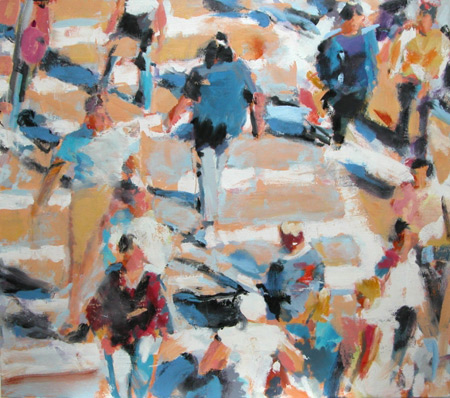 The vibrantly intuitive work of New York Painter David Kapp suggests not only the artist’s predilection for Hans Hofman-like color, but also reflect his longtime interest in capturing cityscapes. This thoughtful grouping includes works inspired by Los Angeles and New York City. From bicycle riders to taxi cabs to fast-moving pedestrians, Kapp is clearly at home in the hustle and bustle of urban environments. Works like “West-End” suggest the influence of Bay Area School painters from a half century ago, like Richard Diebenkorn and David Park. Planes of thick oil paint register as vehicles speeding along a highway, delineated by smudges or lines. The composition takes a birds-eye view of moving traffic, with correspondingly urgent and riotous color.

“Crosswalk” looks like a still taken from surveillance camera footage — an overhead glimpse of people moving past each other on the white stripes of a crosswalk. Here, Kapp’s injection of bold color adds life and vibrancy to what might otherwise seem like a plainly voyeuristic scene. Elsewhere, buildings and cars are reduced to their most basic geometric forms. The mixed-media collage “Bowery North” is rendered in chalky grey-blues and lemon yellows. Cut-out squares and rectangles are arranged in a pattern, resembling gridlocked traffic. Familiar as the senses are, the way they are handled imbues them with mystery and impulse — singing the praises of cities not only in constant movement, but filled with myriad potential as well.