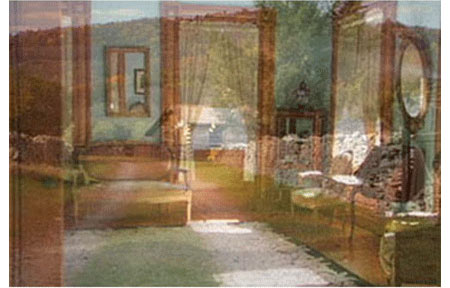 Nicole Cohen’s “French Connection” fills the gallery space with three projections along the main wall, video on a smaller monitor to the side, and a composed soundtrack gracefully emoting from speakers installed in the corners. These form a nuanced meditation on the lingering aesthetics of the court of Marie Antoinette and imperialism in absentia. The installation originated with the research she conducted in 2007 for a Getty-commissioned project incorporating French decorative arts from their collection. Cohen employs layers of video with stills of interiors and illustrations of French buildings of that era; the overall presentation and flow calls to mind the late Jeremy Blake, particularly his series ‘Winchester,’ a very tough act to follow. In fact, the river valley depicted in Cohen’s central projection isn’t in France at all but rather French Azilum, a town in Pennsylvania where Antoinette and court were to be hosted but, alas, never arrived. The series of pencil and pastel drawings in the side gallery, despite their simplicity in relation to the installation, take a slightly different angle but are equally effective in their bridging of primitivism and carnality, doing so with a sense of the effete. Puffy love chairs and ornate bureaus are paired with hanging meat or fur, or lit cauldrons, and the simple poetry somehow lingers for as long as its more ambitious brethren in the main space.