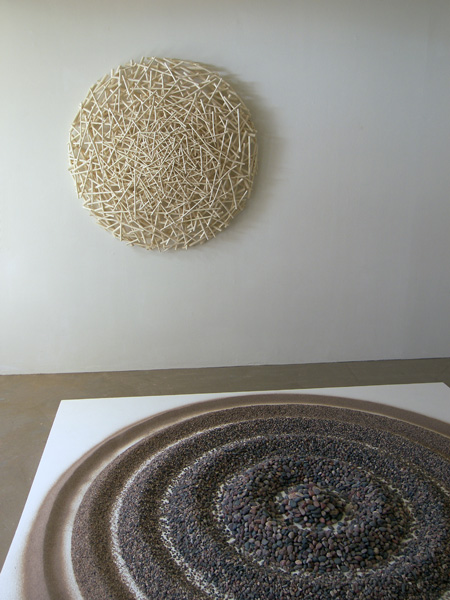 As proof of how scrupulous the longtime collaborators Roger Asay and Rebecca Davis are when it comes to maintaining the integrity of their chosen materials, consider “Salt River Rings,” an installation prepared especially for the Larsen show. After choosing gravel of various weights from the normally dry Salt River bed in Phoenix, the artists carefully cleaned it, saving the silt that washed off. In the resulting artwork - which took four days to install - the silt forms the eight-foot outer ring in a series of concentric circles, and the inner circles use the gravel in larger and larger sizes, culminating in a Zen-like mound in the very center. In its simple beauty, the work reflects the essence of a desert river. Similarly, “Sedona” captures the harmonic arrangement of the red-rock landforms that this central Arizona town is famous for by using actual red grit from Sedona and then boxing it in five staggered glass-front columns to suggest a rocky landscape.

Asay and Davis continually travel through Arizona in search of the found objects and raw materials that eventually make their way into the artists’ installations, as well as into towers, spheres, domes and other sculptures. Their signature pieces are polished globes using found-wood pieces of various sizes that are held together not by glue or nails, but by dowels. New works include “Manzanita Tower,” using compressed wood segments in an 8-foot-high column, and “Elm Jumble,” twigs gently assembled into a wreath-like wall hanging. The less disturbance to the materials, the better is the artists’ credo. Their statement alludes to creating unity out of seeming disorder and using geometric forms for heightened visual clarity. This organizing principle ironically establishes a tone celebrating nature and elevating its hues and textures out of an oft perceived monotony. The sculptures serve as microcosms of Arizona’s multifaceted landscape.