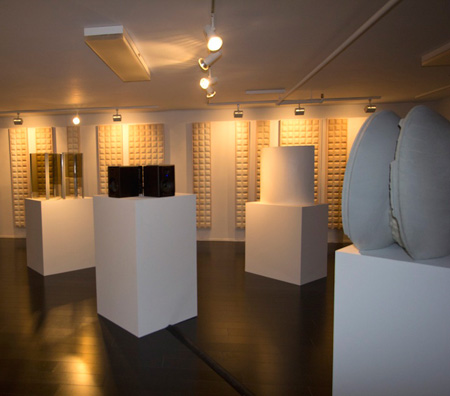 Manipulation of sound — reflection, absorption, projection — takes center stage in Los Angeles–based sound and sculpture artist Jacqueline Kiyomi Gordon’s exhibition "No Touch." Comprising the show are six installations, two of which incorporate speakers and sound; the other four “shape” ambient sound. Three of the pieces take the form of precision-sculpted patterned foam that is reminiscent of what one would expect to find on sound-studio walls; these pieces are also wall mounted. Another of the works, which fills a small room, is an exaggerated version of these three: the foam is much larger, extending well into the space of the gallery.

The final two pieces, those featuring sound and speakers, send audio directly, pointedly, at different objects. Of the two, “Untitled (Fantasy II)” most readily conveys what constitutes the heart of this show, inducing in the “viewer” an experiential awareness of sound shaping. Four speakers aim sound at a large, geometric foam and fabric construction. As one moves around the piece, the sound bounces and shifts radically; the dramatic sensory effect is not unlike moving through a large Richard Serra sculpture in terms of its impact on one’s spatial awareness. The artist who most readily comes to mind is another sound sculptor, Bill Fontana, who also uses directed sound to create audio experiences. And as does Fontana’s work, Gordon’s, with its multi-sensory engagement, heightens our environmental awareness and keys us in to the subtleties of our changing or altered surroundings.