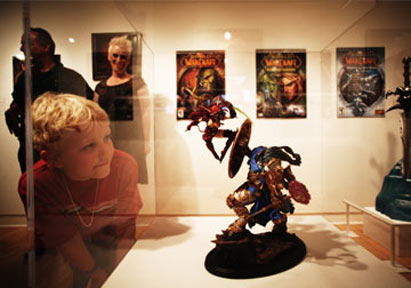 “WoW: Emergent Media Phenomenon” may be the first museum show displaying art from and inspired by an online computer game, “World of Warcraft.” The game’s creators, Blizzard Entertainment, claim that eleven million people subscribe to the game monthly, adding that the exhibition is as much about popular culture as art. The works are art pieces based on popular characters and scenes within the game, giclees of computer-generated artworks, and fan art--paintings, drawings and installations inspired by the games. The most painterly of these are three 72 x 48 inch oils of statuesque characters by Jorg Dubin. While the show manifests slick computerized imagery, the characters and settings are often derived from old sci-fi flicks, comic books and Star War-like scenes. On the lower level, assistants use computers to teach players to protect and help the wounded characters from the virtual ravages of the game, an interesting conceptual twist.