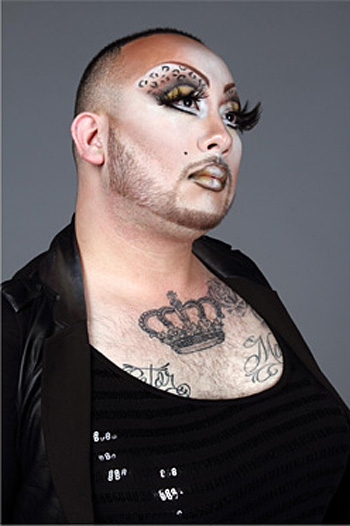 The body has long been an issue-laden site in Naida Osline’s photographs. Whether erupting into engrossingly grotesque deformations or seamlessly merging plant, animal and human DNA into freakishly beautiful biological impossibilities, her images have insistently prodded our sense of what is normal as well as abject. Within our complex responses of rejection and kinship we could always find her tickling at the emotional layers imbedded in our desire to observe another’s body. At first glance Osline’s latest photographs, showing in concurrent exhibitions, feel far less challenging. Rather than lush, alien-looking mutated body parts they present exquisitely detailed and gorgeously colored large scale photographic portraits of middle-aged men. As images they are clearly indebted to classic painting and sculpture with those imbedded traditional proclamations of the accepted social order. Where these photographs get interesting, however is in the way Osline tweaks our way of assigning worth to such oversized portrayals. By asking the different street denizens and shopkeepers she worked with for her “Men” series to each remove their shirts and photographing them as classic naked busts she strips them of all class separations and renders each man simply, and respectfully, for their individual humanity rather than class or role. That they also have draped around their unshaven throats some kind of snake skin, theatrical faux fur or are perhaps crowned with a live octopus makes them look no less impressive. They look us directly in the eye and seem to exude a sense of inherent male power.

By contrast Osline’s "Royalty Series" of “Queen’s Men” and “Drag Kings” (men and women who dress in drag) are not secure in their own skin. Rather, because they draw their power and identity from applications of the other sex’s clothes and hair, their portraits are about the way those things confuse and align with our expectation of gender identity. While more challengingly outrageous to look at, these sitters appear no less dignified in their idealizing portraits. Osline’s use of photographs to examine the male body and identity is reminiscent of John Coplans’ black and white photographs that used his aged naked body to examine our culture’s cult of beauty and its historical and anthropological models constructed around the body. It’s interesting to consider what we have to strip away, and slip into, in thinking about who we are.