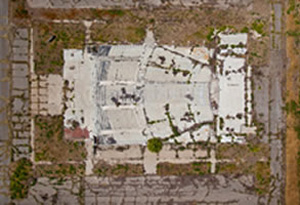 When it comes to relics and ruins steeped in ancient history, Southern California is not exactly Athens or Rome. But, the crumbling Ed Toro Marine Air Station upon which the Orange County Great Park slowly unfolds has already provided plenty of creative fodder for historically minded local artists. “Marks on the Land: The View from Here. Aerial Photographs by Tom Lamb” features minimally altered digital shots taken by helicopter of the airbase’s buildings and runways, disappearing adjoining fields and what is left of two former Tustin air bases. The results are nothing short of spectacular, not at all what one would expect of aerial photography. Instead Lamb’s prints resemble abstract paintings ("Kandinsky, 2011") in some instances or in others the mysterious creations attributed to galactic visitors ("Traction").

Widely traveled and versatile, Lamb likes to classify himself as an abstract expressionist photographer. “Anselm Kiefer, 2007” bears him out. Shooting from varying elevations, marks on the landscape such as tire tracks or tractor grooves offer a visual leitmotif; while smaller shapes, sometimes a mere speck of color (“Tustin One, 2005”) provide a sense of proportion and additional visual stimulant. The work also invites ruminations about use of land, the influence of developers over peacetime urban/suburban politics, new interpretations of the biblical transformation of swords into plowshares. And most specifically to his subject, military hangars into gardens and grassland. “PA 40 Sprinkler, 2006” recalls Sufi dancers and thoughts on motion and grace, qualities that these images do not skimp on.