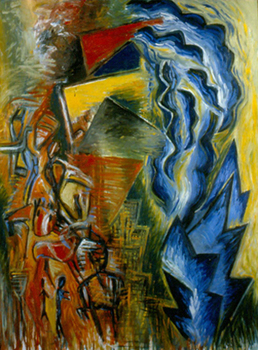 Continuing through April 29, 2012
“The Courthouse Steps” is an example of a painting that, although it has the feeling of pure abstraction, is underpinned with glimpses of representation and is derived from a real-world scenario: a political battle over the apparently wanton destruction of historic petroglyphs in Albuquerque’s Petroglyph Park in the 1980s. Part of “Landscapes of an American Modernist,” Jaune Quick-to-See Smith’s chaotic assembling of imagery conveys a sense of the turmoil endemic to the events that inspired it.

“Sunset on the Escarpment,” also referencing the tract of land where thousands of petroglyphs were in danger of being defaced, is bold abstraction that contains imagery, possibly specific petroglyph designs, that stand out from angry, red surroundings. The title suggests the near-demise of the park that Quick-to-See Smith, and other activists, helped to gain protected status. It conveys her sense of the  landscape as inhabited space—by history, time, nature, and  man—and the desire to retain equilibrium between them.