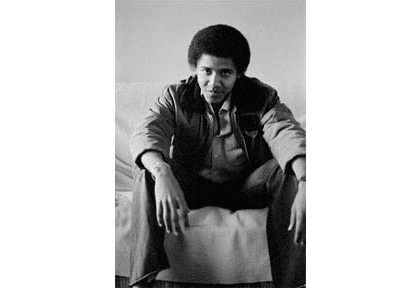 Long before Barack Obama became the 44th President of the United States, he was known as “Barry” on the Occidental campus during the 1980’s. Lisa Jack’s series of black and white photographs fortuitously taken at the time, and titled here “Barack Obama the Freshman,” provide an intimate portrait of the future politician, chain smoking cigarettes, flashing his signature grin, leaning within a narrow frame of a hallow and hiding beneath the brim of a straw hat. The exhibition not only revels in the fact that these photographs were taken long before the subject achieved ultimate celebrity, but allows the viewer to witness the duration of a photo session. In the first grouping of photographs Barry seems apprehensive, uncertain how to position himself or where to direct his gaze. In subsequent pictures it appears that his dynamism takes over--his grin widens, he removes his bomber jacket and begins to directly confront the lens of Jack’s camera. We witness a transformation from a passive to an active subject. But are the photographs only valuable because we actively seek an intimate knowledge of a now fabled politician’s past, because “Barry” Obama works as a subject for student portraiture, or are Lisa Jack’s photographs actually inventive?