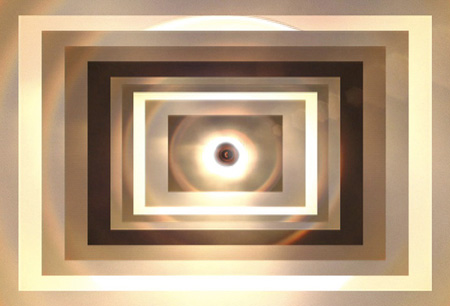 Chicago-based multimedia artist Scott Wolniak follows up his impressive 2010 show with a new digital video installation entitled “Flash Art (Circles and Rectangles).” Filling the entirety of the gallery’s back wall, the projected video begins with a close-up of a light bulb being flicked on. This creates a sudden burst of light that overexposes the camera’s settings, creating a halo-shaped after-image.  Wolniak repeats the shot several times, first slowly, then at ever-quicker momentum. He proceeds to edit the repeated image into a frame underneath the establishing image, then layers the same shot beneath the new image, repeating the process until there are scores of layered rectangles frenetically repeating the same sequence.

What began as a comprehensible image rapidly turns into rectilinear abstraction. The ambient sound of the light switch being flicked on is also included and repeated, creating a soundscape of myriad clicks and clacks, which in aggregate sound like a dance-off between hyper-energetic tap dancers. With its relentless build-up from simplicity to complexity, the piece is a virtuosic, immersive tour de force.