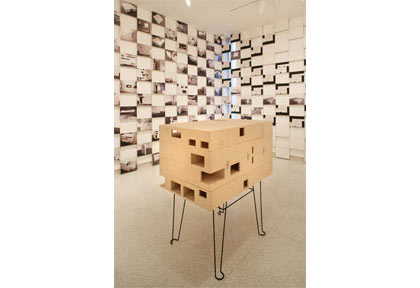 Process, not product is the focus of “Mix: Nine San Diego Architects and Designers.” In addition to presenting completed projects, the plans, models, photographs, videos, wall panels and sculptural forms reveal how proposals emerge. They also address the social and economic conditions which shape the development of the ideas and forms. Lloyd Russell's “Abacus Mass Model,” a giant, floor-to-ceiling counting tool, consists of dozens of permutations of miniature architectural components. These same components are configured and reconfigured in “Animated Abacus,” a hypnotic animated film. These pieces have the playfulness of a child’s building system and includes an accompanying instruction video. Sebastián Mariscal's dramatic tunnel entrance into his project space serves as a reminder: architects excel at manipulating space. His tunnel directs you both physically and visually. Only upon leaving the space do you experience its full, subtle but powerful impact.