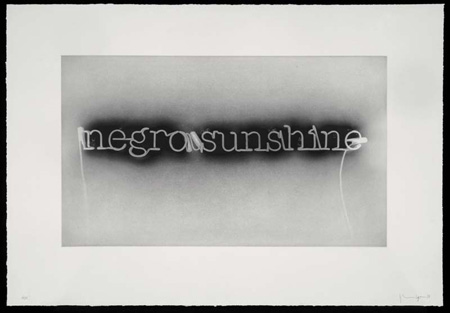 Brooklyn-based artist Glenn Ligon uses text as form and content to raise issues of identity politics. In prints that are both confrontational and visually striking, stenciled text appears in a scattering of lone letters, or with phrases repeated.

The most directly race-talking work is a photo-gravure etching of a neon sign spelling “negro sunshine.” The print, entitled “Warm Broad Glow (Reversed),” is a negative of a photographic image of the sign. The words “negro sunshine” are white lowercase cursive, while the spill of light from the text is black. Ligon is said to have sourced the text from a 1909 Gertrude Stein novella that involves a woman of mixed race. In Ligon’s reversal, the word negro is not black but white, and instead of shedding light, it casts a shadow. The image is all smooth curves and visual clarity, but the intended meaning has been nuanced with mixed meanings and complex history.