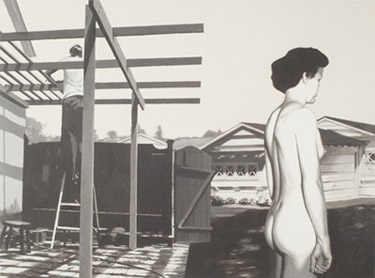 There is a certain air of poignancy that wafts through the paintings of Martin Mull. Sifting through the attic of America's faded mid-century, middle-class dreams, as he does, Mull also sifts through long-faded aspirations and rituals of middle-class life, conjuring a world as strange as any one might invent. Although the figures he depicts often seem to be enjoying themselves, or blissfully unaware, his compositions are imbued with an abiding sense of unease. "I want the works to say, 'It's safe, come on in.' Then you hear the door slam behind you," Mull explains. "I'd like [for viewers] to feel the tensions of that. The tensions are formalist--dark and light, shading, composition--then they become psychological."

Mull, who is also known as a comic actor and satirist, has been painting ever since he got his MFA at Rhode Island School of Design in the mid-60s. While his work undoubtedly displays glimpses of dry wit, its tone is straight-faced and mysterious, almost elegiac, mapping out a distinctly American terrain wherein banality and the surreal, optimism and despair, anxiously coexist. His recent works draw loosely from found images gleaned from popular magazines like LIFE, LOOK, and The Saturday Evening Post, nudist and "naturalist" publications, and troves of period snapshots taken by strangers, which began when his wife bought a bunch for him off eBay one Christmas. (Mull himself was raised in northern Ohio, until his family moved east to Connecticut. Oddly, his parents took no photographs of him as a kid, which lends his project a knowing, autobiographical subtext.)

With their restrained palette and taut, cryptic compositions, Mull's paintings are at once striking and elusive, maintaining a crafty balance between what is hidden and revealed. Adding to the mix, many of them are rendered in grisaille format, splice between monochrome and color, or add framing elements such as patterns from old floral wallpaper that further push the images into the past, enhancing their self-awareness. "I consider myself a painter, but I am definitely a picture-maker. I make pictures," Mull says. "I want a certain illusion. I want a certain logic in them, that is not quite as jumbled as the previous works were..." he adds. "The evocative power of a specific image is most important to me."

Although he lives in LA--he keeps his studio at his Brentwood home and wakes at 5:30 each day to paint--Mull has been exhibiting outside California for the last decade: at Stellan Holm Gallery in New York; and in London, Europe, Korea. His recent show at Samuel Freeman Gallery in Santa Monica marked his first LA show in eight years. The show's title work, Split Infinitives, is an eerie triptych: in the center, a silhouetted man with a shovel digs (a ditch? a grave?) while on the right, a grey-haired woman stares down at a row of empty plates, and on the left, a figure in a grinning, oversized clown head parades before a bleak vista of factories. In Comedian, a figure based on Lenny Bruce sits slumped before a TV set, staring at an ad, while nearby, a woman lies ignored beneath a shadowy window. While both works outwardly invoke comedy, their muted tone of brooding estrangement offers few belly laughs. In other works, nudists cavort or stand pensively against backgrounds of bland suburbia, while other figures innocently play out their private scenarios, amid images of the good life, hard times, or, perhaps both.

In re-conceiving and rendering these enigmatic scenes, Mull remains open to discovery, trying not to impose judgment, letting the images dictate their dialogue. "Basically, it's like the U.N. You have to decide on what language you want them to speak. I'm in charge of that. Then, the pictures are in charge," he observes. "At some point, the painting says, "I'm going this way, are you coming with me or not?Õ That's where the work begins; that's where the fun begins."