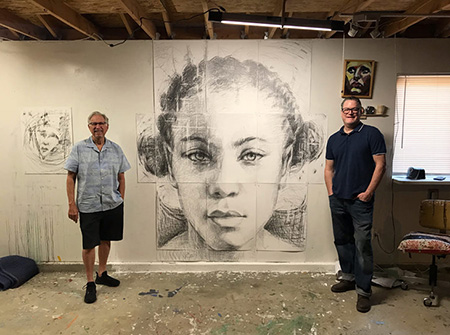 An eight-foot-high portrait of Ruth Bader Ginsburg dominates the back wall of Bradford Salamon’s studio. The artist drafted this realistic drawing of the late Supreme Court Justice freehand, following her ill-timed death last September. Surrounding Ginsburg’s face are several of her quotes addressing the roles of women today, along with selections from her lectures, dissents and rulings, all transcribed by Salamon onto the vellum paper.

The artist explains that the solitude he is experiencing during the ongoing lockdown has led to intense self-reflection. Combined with his admiration for Ginsburg’s “bold and brave” persona, he felt compelled to create the larger-than-life portrait as a tribute to her life and work. Even more significant than Salamon’s liberal beliefs, imbued into the drawing is the compassionate nature of the subject. The face staring out at us conveys the wisdom, concern and thoughtfulness that Ginsburg was known for.

Salamon has been evolving as a portraitist for more than three decades, often depicting artists, collectors, arts writers and leaders in Southern California (many of whom are his friends). It is a circle that includes Don Bachardy, Tony DeLap, Llyn Foulkes, Peter Frank, Andy Moses, Eric Minh Swenson and others, along with a series of self-portraits. Working with oils, gouaches, brushes, palette knives, pencils, squeegees and even afro combs, he intuitively interprets the inner nature of his subjects. This poignant facet of his work often compels long periods of engagement. It also affords his completed artworks exceptional energy, immediacy and movement.

During my visit to his studio in Monrovia, California, as Salamon and I discussed his life and work, my eyes intermittently focused on his recently completed portrait of myself hanging on the wall. The painting, as I observed, is a like a mirror, an accurate likeness of my face and expressions, but more importantly a reflection of my inner self.

As I gazed at the nuanced painting, I asked Salamon to talk more about the effects of the ongoing pandemic and lockdown on his life and work. “At first, I was less distracted,” he said, “as I didn’t have to go to openings and I got a lot more done.” As the months went on, his recognition of the tenuous nature of existence induced him to paint more intently. It has evolved into a practice he considers a form of therapy. And as he was unable to meet with people in person to portray their images, he began creating large portraits of people in the public domain, including the aforementioned portrait of Ginsburg and artist Agnes Martin. From these he segued to drawing large portraits of lesser-known women and girls who he is able to interact with.

Why is Salamon creating these new portraits on a larger scale than previously? “Large suggests power,” he says. “And women today need more power. Large also gives me room to do automatic drawing and random mark making on the vellum. And I can add graphs and truth tables to the negative space alongside the faces.”

An eight-foot-tall drawing in Salamon’s studio, “Holly,” is a portrait of a 12-year-old African American neighbor and friend of Salamon’s daughters. “I drew her, he said, “because she is an innocent, vulnerable, beautiful girl. And with the Black Lives Matter movement on my mind, I feel that she represents the future.”

He recently showed a sketch of the portrait to Mark Hilbert, co-founder of the Hilbert Museum of California Art, on the campus of Chapman University in Orange. The arts entrepreneur was so enamored with the soulful drawing that he plans to install “Holly” in the entryway of his museum for its 2023 expansion. Expect to see much more of this new body of work once the pandemic lifts. Salamon exemplifies how many artists who had already produced a distinguished body of work are likely to surprise and engage us in new ways as we shift into that future.