In Defense of the Lowly Meme
Aesthetic Commentary
by DeWitt Cheng 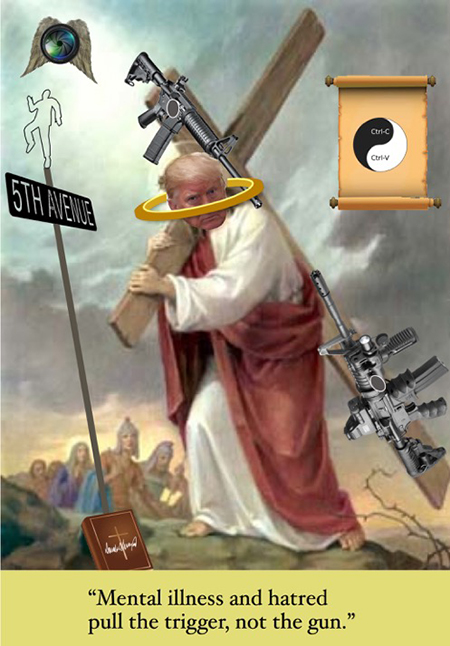 The digital era’s negative effects on the popular consciousness, including trolls, flaming and spamming, are now familiar. Due to the malignant machinations of the GOP and GRU (Russia’s internet troll factory), we can add to that roster the 2016 election of the egregious Trump.

Technology taketh away, but it also giveth. The meme, generally accorded the condescension and disrespect previously accorded to puns, is nothing less than a new art form. Powered by social media, memes have been used to undermine the information state. It can serve up satire and information as did the pamphlets of the American revolutionary era, or the editorial cartoons of the print era. Anyone with a point of view and a sense of humor can, with a modicum of technical skill, create and disseminate potentially memorable and influential images and text immediately and ubiquitously. The meme is the digital child of two traditions, one primarily sociopolitical, the other primarily aesthetic: i.e., the editorial cartoon and the Dadaist/Surrealist collage.

The editorial cartoon tradition is exemplified by Honoré Daumier (1808-79), Thomas Nast (1840-1902) and John Heartfield (1891-1968), all of whom should be better known today than they are. Daumier ridiculed the French bourgeoisie (especially its pompous, self-satisfied legal and political establishment) and its bourgeois king, Louis-Philippe, whom he portrayed as a mindless glutton with a pear-shaped head. Nast excoriated the political corruption of New York City’s Democratic machine under Mayor William “Boss” Tweed, drawn with a moneybag head, who complained of fake news, “Let's stop them damn pictures. I don't care so much what the papers write about — my constituents can't read — but damn it, they can see pictures.”

Heartfield, a German who anglicized his name out of scorn for lumpen World Ware I-era nationalism, for all intents and purposes invented the photomontage technique. His sensibility combined astute political analysis with powerful and disturbing images that indicted, at a gut level, that savage era every day in the pages of the socialist weekly “Abrbeiter-Illustrierte-Zeitung” (The Workers Pictorial Newspaper). Heartfield’s grandson, who keeps the flame alive, recounted how the artist once jumped from his balcony to escape arrest, hiding successfully in a trash can for several hours.

The Dadaists and Surrealists of a century ago added a dreamlike absurdity to their comments on a Belle Époque civilization gone mad — in the name of God, king, and country — in the muddy, bloody trenches of the Great War. The collaged-engraving books that Max Ernst (1891-1976) cut and pasted together in the 1920s immersed viewers in a world of absurd juxtapositions and unutterable strangeness, pieced together from fragments of nineteenth century illustrations, liberated from their original contexts. The brutal world of German militarism was savaged in the shocking, mordant images of George Grosz (1893-1959).

As an art aficionado and occasional political junkie (though decidedly no joiner), I fell into meme-making gradually, almost unconsciously, with the horrifying election of our mad god-king in 2016. His ignorance and arrogance, as well as his shameless greed and pointless cruelty have infected the country and the world; Orwell’s vision of the boot stamping on the human face forever demanded some response. I had a computer, the internet, basic photo editing software (no Photoshop), time, and a memory for political nonsense. (Remember when Dubya hinted in 2000 that a two-oilman Bush-Cheney ticket might result in lower gas prices? Nobody does; it’s not even enshrined on the internet.)

By using Google Images and editing screen shots, I accumulated a library of images that could be configured to suit my imagined scenarios, or combined to suggest new narratives. Quotations from political figures could be combined and contrasted with factoids from political and art history to point out just how exceptional certain aspects of American exceptionalism actually were. This despite the received wisdom of the mainstream media, the gospels according to the New York Times, Washington Post and Fox News.

A few of my hundreds of memes are included here. They may not be in the same league as the honored dead listed above, but I hope that they have had some effect on awakening the children following our demented pied piper before, raging in the bunker on steroids and paranoia, he initiates “fire and fury like never before,” an American Götterdammerung.

Making these pithy visual comments has kept me on a more or less even keel, while others tore out their hair or just tuned out. In current contemporary art theory, realism (or mimesis, in the Greek original) is seen as retrograde, regarded as in service to past power structures. Only a conceptually-based socio-poilitical practice is considered legitimate in that context. In my view, representational art provides a means of critique that is intellectually and emotionally accessible to non-academics. More important, it makes me feel much better. It may also happen that, in an age when there are too many political extremists who disdain civil discourse, the efforts of a citizen army of memesters may help turn the ship of state away from the mendacious theatrics of the covid-benighted MAGA crowd and their raving Superman overlord.