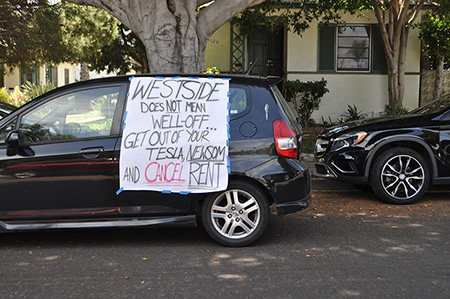 What is the relationship between art and activism, if any? Do they even belong together? When the coronavirus pandemic kicked in nationally in mid-March, artists started thinking vigorously about art’s function in, and relationship to, the world at large. And quantifying art’s impact on the world — which is to say the world beyond the art world — is a tricky proposition.

In the online exhibition, ‘How Can We Think of Art at a Time Like This?,’ [https://artatatimelikethis.com]curated by Barbara Pollack and Anne Verhallen, the artist Dread Scott drafted a statement [https://artatatimelikethis.com/dread-scott] he refers to as “beginning thoughts on HOW TO SURVIVE COVID-19.” Number 1 reads, “In a pandemic, thinking only about yourself will make matters much worse for everyone. Leave the house when you need to, but assume you are carrying a communicable virus when you do, AND ACT ACCORDINGLY. Anything that stands in the way of Principle 1 should be ignored.” The list continues with eight more steps, addressing how we as citizens can and should track this pandemic, and how we need to hold the government and other institutions accountable for keeping us up to date and informed on the virus. Number nine is followed by an ellipsis, “…” and then bypasses all subsequent numbers, jumping down to number 36: “People need art in times like these. Make the art count.”

In times like this art is not irrelevant, but neither is it essential. But making art that counts: isn’t that the most pressing existential question to inform the art we are making right now? With the rise of the coronavirus, this rose to a whole new level. This has been further hastened by the meteoric rise in demand for social change in response to the police murders of George Floyd, Breonna Taylor and so many others, and through them the challenge of counting takes on a whole new level of urgency.

I’m not questioning or casting guilt on artists who are sticking with art that explores beauty, innovation and exploration for its own sake; in other words whose work does not equate with activism. Artists (along with writers and other creatives) do shape social change without resorting to explicit activism, but on micro-levels that are not quantifiable. Do murals featuring one of thousands of iterations of a protagonist in a face-mask create any sort of social change? Perhaps by virtue of their sheer proliferation. Maybe about as much as a billboard. They may be a reflection of the zeitgeist yet fail to move the needle of social change.

The protests staged at last year’s Whitney Biennial by the activist collective Decolonize This Place resulted in the ousting of Warren Kanders from its Board of Directors. Kanders is the CEO of The Safariland Group, which sells tear gas and other crowd control gear. Those demonstrations were the biggest news by far to come out of the Biennial, overshadowing the exhibition itself. It was the grassroots organizing by Decolonize This Place that led to participating artists’ letter to and, in eight cases, withdrawal from the exhibition, and precipitated Kanders’ resignation. The colorful banners that were part of those protests were aesthetically significant, but this was not an aesthetic act. It was clearly a form of activism, just as the current Black Lives Matter demonstrations are being driven by grassroots, non-hierarchical, non-celebrity masses of participants. If the success of the Whitney action was in good part measured by Kanders’ resignation, the far more massive Black Lives Matter actions are driving numerous police reforms along with other initiatives.

Were the eight Biennial artists who withdrew their work at that point engaging in activism? Surely they were. But what about Michael Rakowitz, who was selected for that same Biennial, but had already withdrawn from even participating in the first place. Not to engage in purity testing, his early withdrawal illustrates the wide spectrum of artists and their respective degrees of activism.

For my part, I may be an experienced artist and writer, but I’m a novice activist. Nearly a year ago, I started attending the twice-monthly Westside local meetings of the L.A. Tenant’s Union, which has involved a lot of casework. Tenant’s Union leaders provide practical information and support to attendees who are in some form of rent crisis, whether landlord harassment, intimidation or neglecting to make repairs. With the impact of the COVID-19 pandemic, case work has merged with rent strikes. Renters without income either attempt to organize with their neighboring units, or simply go it alone.

On Saturday, May 30th, about 12 of us participated in the “Westside FoodNotRent Parade,” in which a caravan of about eight cars drove through parts of Santa Monica and Venice, many of the cars honking as they progressed. A couple of members implored local residents through a bull horn that, “if you can’t afford rent right now, you don’t have to pay it! Use your money for food!” Occasionally other more colorful offerings were directed at certain landlords. Most of the cars were adorned with handmade signs related to either the Tenant’s Union and/or canceling rent. I made two at my studio, using butcher paper and acrylic sprayed through an airbrush. One read “CANCEL RENT WESTSIDE  DOES NOT EQUAL WELL-OFF” with an ‘X’ across the word ‘RENT;’ the other: “WESTSIDE DOES NOT MEAN WELL-OFF … GET OUT OF YOUR TESLA, NEWSOM, AND CANCEL RENT.”

I describe these details not just to paint a picture, if you will, but to point out that I felt very self-conscious through the whole process. First, I worried that others in the local wouldn’t appreciate my signs, or my message (this was akin to a studio visit with activists), and second, I worried about what kind of responses I would get as we slowly drove through town on a beautiful sunny spring afternoon. I realized there would be more eyes on these signs than I get on my artwork on any given day … ever. I mainly kept my eyes straight ahead as we paraded down Pico Blvd., along Lincoln Blvd. and then down Venice Blvd. towards the beach. My driving companion informed me that my signs received many reactions, mostly positive.

Even though these signs were not meant as art, they were my message, and there’s something dizzying about putting your work, such as it is, in front of so many faces, in such a short time, while you are RIGHT THERE. Parts of the car parade were fun, especially when one of the members on the bull horn got creative (and before we started seeing a lot more people on the street). But once it was all over, I was just glad to have gotten through it. Becoming an activist doesn’t happen overnight.