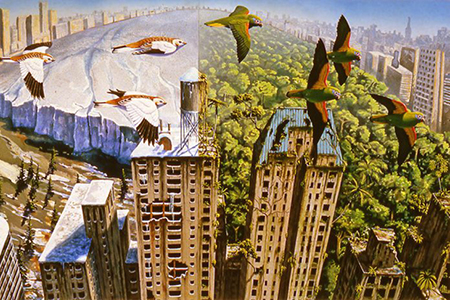 Forget the Green New Deal (and I count myself a supporter), the last month shows that we can save the planet from the developing climate catastrophe by doing less instead of more. It was staring us in the face all along: power down for awhile every decade or so when a nice pandemic happens along. The stories started to emerge a few weeks ago when most of the country’s—indeed the world’s—cars were suddenly parked as the volitional act of most citizens. Sure government decrees pushed the envelope, but the level of willing cooperation has been almost giddy. Hate your hour-long commute? This is a really nice break. Worse yet is the constant stress battling traffic, right? Gone. And the noise outside your window even after you get home from work? It’s quiet; that’s pretty nice too.

So that came as a breath of fresh air just over the last half of March. And that air has been getting even fresher since then. Is pollution gone? Of course not; we should all become familiar with PM2.5 in the coming weeks and months. Is the ozone layer replenished? Not on your life. But the contrast is as clear as the air itself, and, goodness, in a matter of weeks. Not months, not years. If you listen carefully you may well hear the Earth itself breathing a sign of relief. In my mind’s eye she is smiling at us, “welcome home my dears.” She doesn’t realize that we are eagerly awaiting a return to a status quo and should never return to what it was Before the Deluge.

Rather than wrestling with the cost in lost wages and investment—God forbid losing money on our investments!—the pandemic has jolted us into considering exchanges instead of dollar amounts. Not many people miss the commutes in traffic; but those laid off or furrowed do miss the income from the jobs it takes us to. Not many people regret staying at home; but most get stir crazy not being able to go out after awhile. The bonding of families is a beautiful thing to behold; but then there are abusive spouses, and the kids can drive you nuts.

Well our global economic system and millennia-long culture of gradual emergence from chaotic violence was not, until now, designed to quite work in this way unless forced to. But here we are, what will be do with it? The most public voices in America are riveted on a return to what we were pre-pandemic. The worst of these can hardly wait to force everyone back to the treadmill, ASAP, powered by epic quantities of wishful thinking. The very worst of these people are perfectly willing—in too many cases eager—to absorb a steep price in human suffering and loss of life just as long as those people serve as the human capital needed to preserve, perhaps even expand their own assets. The wiser heads understand that a gradual re-immersion will not just minimize the immediate damage to millions of lives, it will allow enough space for a number of adjustments to be made. Our adaptability and return to at least a somewhat familiar routine is most broadly in the hands of these good people.

I cannot help myself from gazing over the next hillock, it’s actually not so very high nor impassable as it may be appeared as recently as February. It is a “we can do this!” future that is just a short distance ahead of our tenuous present. It is strewn with attractive elements. More time at home; less time commuting; work and communication on our desktops; even small patches of yards and streets and parks available 24/7 for physical activities and home gardens; delivery of food, entertainment and other necessities and pleasures. The infrastructures are easy, they are already in place. It’s a vast oversimplification, but in essence we just need to slightly re-organize what it means to lead a “normal” life into accepted social norms. In a way what that looks like is sort of a shorter work week with periodic longer vacation breaks. Possibly it’s all informed by social regulation that permits a more universal application of Alice Waters’ famous dictum of “slow food values.” You know the tropes; this is not rocket science. What we were chasing after for decades, if not for the entire history of our species, was an ideal of increasing productivity as a permanent, eternal feature of life. Like H.G. Welles’ Martians, the speed and aggression of that effort has been felled, “… slain by the putrefactive and disease bacteria against which their systems were unprepared; slain as the red weed was being slain; slain, after all man’s devices had failed, by the humblest things that God, in his wisdom, has put upon this earth.”

We now know, certain beyond a shadow of a doubt, that not only the technique knowledge and means are at our disposal, but the methodology as well, to ride this great whale of a planet until the day an asteroid collides with it or Sol vaporizes it. The luxury of time is not so urgent that we wear it down beyond inhabitability by our very own devices and the incorrigibility of the most corrupt among us. The time of human maturation is at hand.

Give these two articles a read: