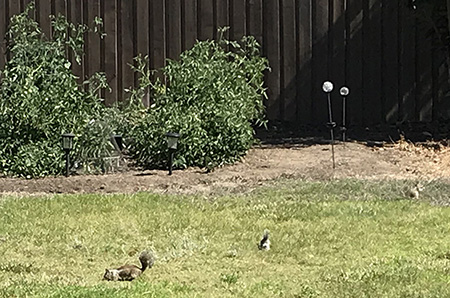 I am privileged to have a good sized backyard, and have taken greater advantage of it in this season of inversion that I have in many growing cycles. Enough, in fact, that it has felt like observing the sprouting and development of flowers, vegetables, perennials and even the ever trite trees and ground cover unfolds like a time compressed film. If when growing up watering the flower beds and roses of my parents house was a dull chore to be resented, now it is a corner of peace and contemplation. The world is in a convulsion, yet here I am under a forgiving Southern California sky in the company of quail and the rabbits who have been generous enough to lend their name to this suburban retreat. On occasion we’ve watched a coyote saunter down our quiet street under the illusion that they are the ones who own the place.

During World War II the older folks were encouraged to work their far more modest plots of urban land, but not for the delights of exercise or communing with nature. These were called Victory Gardens because they added up to defraying the cost of food and increasing supplies that could be sent to our boys. Every tomato grown thanks to personal toil meant a food that could end up somewhere in France or some South Pacific atoll to Feed Our Boys. And today there is a case to be made that the produce of a home garden can soften the worst economic fallout of the pandemic for a family. For me, it’s a nice little project, a maquette, infinitely shy of the public ambition that Robert Irwin brought to his Getty and LAMCA planting projects

Among the critters we share our sacred ground of long term real estate investment with are the squirrels, one of nature’s most hyperactive creations. They are definitely not sweet candidates for domestication, but by appearance they seem designed for petting and hugging. Seven year olds surely universally fantasize about this in part because they will never experience the unpleasant consequence of such gratification. These cute creatures can defend themselves, but their very understandable instinct is to scatter. That is their true talent, indeed it is their particular genius. No matter how content they are in the moment their motor is ever at idle. They squeeze through spaces you think they can’t fit. They climb, they chew and oh how they dig.

Squirrels, considering their size, are heavy feeders and hoarders. With their hyper metabolism it figures, and while they are not that particular about what they eat, many of the things we like to eat they like to eat. We’ve got this one loquat tree whose fruit matures by late May, and at just the right, fully ripened moment a rodent swat team begins stripping it out like a pack of land-locked piranha. I’d never watched them work before, but this year for a couple of weeks I watched them scramble up and down that tree, clenching and shaking the fruit down, carrying particularly attractive samples back down clenched between their thankfully herbivore teeth before settling down for their own dejeuner sur l’herbe.

It was all quite the backyard entertainment as long as it was loquats. The family enjoys eating a few, but frankly they are of minor pleasure next to meatier, juicier stone fruits. We let them have their fun, but it all took a different turn when they started to notice the melons, the cucumbers, the beans, even the corn. They couldn’t even wait for the fruit to appear. Off started to come the leaves. Stripped after a day or two of light snacking, the once robust young vines that were intended to bear high summer cantaloupe were reduced to barren stem structures. As revealed armatures the structures are quite lovely, but now they would yield nothing. The romance of a gardener’s vision is that the labor and patience of cultivation culminates at the table. When it is said that there is nothing like a freshly ripened tomato straight off the vine … well, it’s true beyond the pleasure of the palate, but that is the culmination, the completion of the cycle, the end of the story. But now these gnawing rodents, these fell creatures crossed the line from amusing foragers to destroyers of worlds.

That’s where the propiatary impulse changed my emotional gear. These are my plants, after all, nurtured to express nature’s fecundity. It was a garden meant to pose for the camera, to be photogenic. To preserve my vision the time arrived to do away with the enemies of my Eden. I began to visualize traps and poisons, setting an example, a lethal warning if not an all out regional war. Online I considered all available weapons. However, the more I contemplated the various options the more disenchanted I became. There are an array of portable fences, garden staples, pepper sprays and granules, sonic stakes. All make their claims to make your garden so unpleasant that most animals will choose a more sedate corner of the world.

None of them dissuade every animal. They reduce but do not eliminate the destruction because there will always be creatures bold or desperate enough to pass through such tests of their will. A few weeks have gone by since I began starting the day with the ritual spraying, and not a day goes by without a few tomatoes reduced to shards. But most of them, hundreds in fact continue their march towards July and August ripeness. The occasional stroll to unstiffen my legs from their customary seated position results in several of the little guys sprinting through the entry holes they’ve dug under the snake wire. They will warily return. We lounge with late afternoon cocktails on the patio, leaving them uninterrupted at their quasi-domesticated best, grazing mostly on the lawn, the tomato and corn plants rising ignored in the background, incomplete but still generous. The depletion tax having been paid, the grinding noise of the world from which we have retreated recedes and the imperfect squirrels are my partners.