All Public Statuary Should be Abstract
Column
by Matthew Kangas 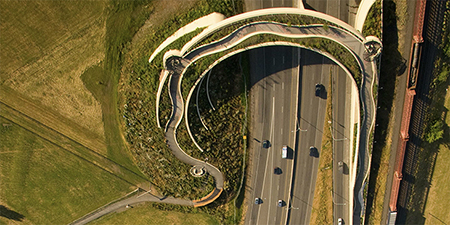 The recent controversies over the removal of public statues of historic, military and political figures raise the issue of how public art is selected; what role civil society and community groups have in the say-so of who is represented; and what alternative strategies could be applied in order to avoid the use of public art for political ends. In Seattle, a long history of municipally funded art in public places set the pace nationally in the 1970s and 1980s, thanks to enlightened city hall administrations and voters in general who trust professionals, not angry individuals or groups, to manage and maintain aesthetic quality for the city-owned collection.

After Philadelphia, Baltimore, and Honolulu, in 1973 the City of Seattle passed One Per Cent for Art legislation so that a portion of each site budget funded by the city must be spent on art. The State of Washington quickly followed suit with its own One-Half Per Cent for Art law, leading to works such as Maya Lin’s Lewis and Clark “Confluence Project” (2019) in Grays Harbor County, for example. Before that, within the city, works by Isamu Noguchi were followed by large-scale sculptures by Alexander Lieberman, Ronald Bladen, Michael Heizer and Doris Chase. Near Lake Washington, a federal project for NOAA (National Oceanographic and Atmospheric Administration) maintained levels of quality by commissioning Martin Puryear, Scott Burton, George Trakas, Siah Armajani and others to create site-related projects that reflected the contextual direction abstract art took in the 1980s.

None of these works involved public statuary or the representation of the human figure; this is one of modernism’s great assets as a style for public art: no one can be offended and everyone can create their own sense of meaning. This makes abstract art more democratic because its content is more open-ended to a variety of viewers. The earliest, Heizer’s “Against, Adjacent, Upon” (1976), was vandalized for the first few years but has been graffiti-free ever since or, in another canny move, immediately cleaned when attacked. It is the touchstone for a larger abstract sculpture site up the hill from Elliott Bay, Olympic Sculpture Park (OSP) of the Seattle Art Museum, the largest downtown park. Recipient of some of Bagley and Virginia Wright’s collection, including Mark di Suvero’s first commission anywhere, “Bunyon’s Chess” (1965), OSP is free to the public seven days a week. It is the showcase for one of Richard Serra’s largest sculptures, “Wake,” (2004), tall, bulging steel walls, as well as works by Roxy Paine, Beverly Pepper, Teresita Fernandez, and two all-black multi-part pieces by Tony Smith.

Why not follow the Seattle example and eschew or quietly avoid any further historic or political-figure statues? In Seattle, Territorial Governor Isaac Stevens could easily be removed from Times Square; Christopher Columbus by Douglas Bennett, funded by Italian-Americans, would not be much missed from its waterfront perch. The George Washington statue near Henry Art Gallery on the University of Washington campus is eclipsed by a beautiful Robert Irwin installation, “Nine Spaces, Nine Trees” (1983), near another Puryear, “Everything That Rises” (1996). These latter works declare their aesthetic status, complement high-quality architecture, and are a good fit for the university environment.

Downtown, the memorial to lost firefighters in the Mary Pang noodle factory fire should be removed; it is grotesquely literal about the moment of their death and out of place in Occidental Park. Similarly, Secretary of State William Seward’s statue is on a pedestal because he approved purchase of Alaska; this would be better sent to Juneau, that state’s capital. Ronald Petty’s tribute to dead halibut fishermen — a bronze figure harpooning a fish — at Fishermen’s Terminal has been a laughing stock from the beginning. (None of these artworks were paid for by taxpayers.)

On a national level, things are more complex, but could be clarified and simplified with local bans on the human figure. European commentators have long wondered why there is no U.S. national monument to the crimes of slavery, the way culpable European nations have commemorated the Holocaust. Such a work could be abstract, like Peter Eisenman’s “Memorial to the Murdered Jews of Europe” (2005) in Berlin, or Constantin Brâncuşi’s largely unknown 1938 masterpiece in a public park in Romania, “Ensemble of Târgu Jiu,” allées of columns leading a huge stone table with empty stone stools, the “Table of Silence.”  Maya Lin’s “Vietnam Veterans Memorial” (1982) is an outstanding example of my theory; hated at first, now revered. Literalists were able to add their bronze figures at a distance. Poorly conceived by comparison, the “Korean War Memorial” (1995) nearby on the Capitol Mall has fallen bronze soldiers spread out across a lawn, confusing and inconclusive, like the Korean war itself.

Perhaps surprisingly, the titles behind many of Dan Flavin’s fluorescent-tube light sculptures could be adapted, too: dedicate each piece to a different friend or lost loved one. For example, with the recent death of curator Germano Celant, Flavin’s light-tube configuration named for him takes on greater resonance and universality. Abstract art can be timeless; figurative art is too connotative for such purposes. After the Tulsa, Oklahoma pogrom against African-Americans in 1921, any commemorative memorial should be, in my view, quiet, subtle and tragic in its remembrance: 324 dead bodies or graves would not be appropriate. Abstract art is the answer.