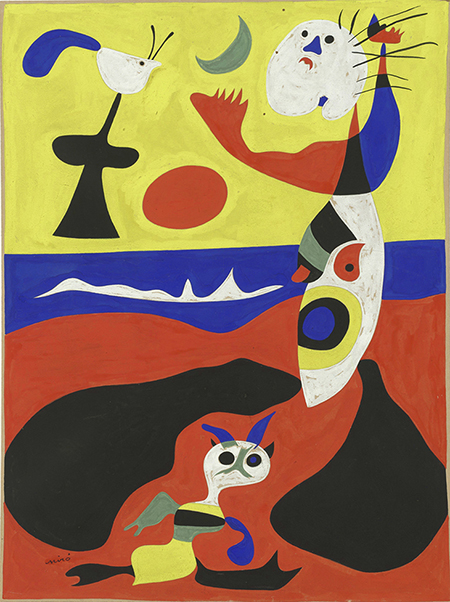 In early March, as art venues throughout the country were closing, at first I was alarmed. I immediately began yearning for my previous art writing life — one filled with exhibitions, events and dialogues with artists and art supporters.

To understand the rapid changes taking place, I began spending hours watching and reading political news, along with numerous articles about our struggling art world. Inundated with so much novel information, I soon perceived this period as a surrealist metaphor, as a mirror of the European mood just before and during the Second World War.

Yet I realize that the ominous, foreboding mid-20th century era yielded magnificent artworks by many now-famous artists, including Picasso and Miro. And I often thought about my favorite Picasso quote from 1945: "What do you think an artist is? ...he is also a political being, constantly aware of the heartbreaking, passionate, or delightful things that happen in a world, shaping himself completely in their image … No, painting is not done to decorate apartments. It is an instrument of war."

As great art has been shown to arise from crises, I began to seek dialogue with people in the arts through Zoom, phone and emails. These artists, arts administrators, faculty members and gallery and museum directors are exploring new cultural models to advance their own and others’ creative endeavors. They are discovering new ways of teaching, interacting, presenting art and reaching out to artists. If it initially felt like the world had suddenly stopped, I could see that wheels were turning.

Granted, many art lovers bemoan the fact that they are unable to enjoy attending exhibitions or immerse themselves in theater. But others reference past plagues as leading to positive cultural and social changes — and those changes were likely germinating during the pandemics.

Not surprisingly then, many people I interview for art writing assignments express their creativity in inventive ways and plan to employ their newly developed cultural models when this pandemic is over, or even in the midst of it. Perhaps we will become a more art-loving civilization, one in which authentic culture plays a more significant role in our worldwide revitalization. One can dream.

With this admittedly magnanimous vision of our world, I often try to write about these artistic undercurrents from the perspective of the enlightened people I interview. As Rick Stein, Art Orange County’s CEO said to me recently, “We will witness a renaissance in the arts, much like what followed the historic dark ages in Europe, and it will be unlike anything we have experienced before — a time of healing, a time of joy and a brilliant new era of discovery.”

Another visionary, Stephen Barker, Ph.D., Dean, UC Irvine Claire Trevor School of the Arts, sent me the following quote: “We intend to come out on the other side of this pandemic having learned new ways to create art and to be impactful and fully relevant.” And artist Osceola Refetoff's recent photography journal contains this prescient comment: “I wonder if our collective experience might even stimulate a cohesive art movement or two, the likes of which we have not seen since the very idea of art movements was seemingly discarded towards the end of the last century.”