Through a Gallery Darkly
Column
by Richard Speer 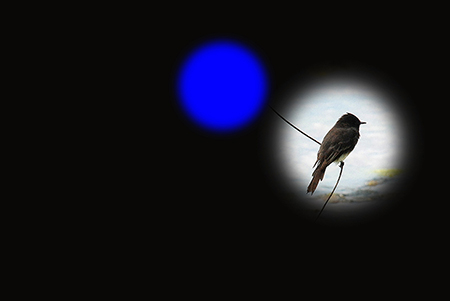 Two months ago I ventured into Elizabeth Leach Gallery for the first time since February’s “First Thursday” art walk. It felt both reassuring and unsettling to be back in an art gallery (now open by appointment only) and converse with Elizabeth and gallery director Daniel Peabody, all of us wearing masks and standing six feet apart. Notably, all of the artwork I saw that day and in subsequent outings has seemed marked by COVID-19, as if the art itself were amplifying the dread we are all feeling in this paranoia-inducing time. It telegraphs the tenuousness of life, the inevitability of death, and the feeling that everything is in a state of unsettling transition. Some exhibitions remind me of these things in quite personal terms.

At Leach there were two shows up, one of paintings by the late Mary Henry, which really pushed my buttons emotionally. A West Coast treasure, Henry was a master of geometric abstraction who lived her last years on Whidbey Island, Washington. Back in May 2009, at age 96, she had a show at PDX Contemporary Art. It opened on May 5 of that year, and she died on May 20. My review of her show for Willamette Week newspaper was the last review of her work published in her lifetime, and to this day I get goosebumps remembering that show’s standout painting, “Full Moon Over the Mendocino Headlands” (1971).

Sometimes a painting is so evocative, it can draw a wellspring of superlatives from anybody who’s paying attention. That piece could have drawn blood from a stone. What it drew out of me remains one of my favorite passages I’ve ever been inspired to write in a review: “The painting posits horizon line, silvery orb, and cool, flat blackness stretching out implacably, evoking the chill of windswept cliffside, the white noise of surf pounding rock. Mystical in atmospherics, muscular in its graphic punch, it balances Zen quietude and Western grandiosity, intoning its soundtrack in the mind’s ear: part bamboo flute, part fugue — an Alan Hovhaness tone poem in acrylic paint.” Looking at Henry’s works at Leach, I felt in a time warp, as if the artist were still alive. I’m still in my thirties and Barack Obama has just been sworn in as U.S. President. Today, those times seem innocent to the point of prelapsarian.

The other show was Jaq Chartier’s “Sun Tests.” Chartier has a career-long obsession with staining surfaces with volatile substances and watching those stains slowly brighten, darken, or hold fast. Part of the joy of her work is not knowing exactly what they’re going to do over time. Problem is, many if not most collectors don’t want something they paid good money for to change. If you bought a colorful painting, you don’t want it to blanch out on you six months later. For certain works in this show, instead of staining wood panels and then exhibiting them, she has captured images of stains on other panels as they migrate across their trajectory of chromatic metamorphosis. These are then transferred via a dye sublimation process onto aluminum, so that the image becomes permanent. Essentially she has taken a picture of change that will never change, a freeze-frame of something in the process of decaying into oblivion. Sounds a little like watching the news these days, doesn’t it?

The next month, Leach showed Matthew Picton’s “Eschatologies.” The subject matter was apropos enough: disease, destruction, and the end of times. In a series of virtuosically complex, conceptually and physically layered wall sculptures, Picton refers to Venice during the cholera epidemic of 1902; Richard Wagner’s opera “Götterdämmerung” (“Twilight of the Gods”), which concludes his fabled Ring Cycle with the fiery destruction of Valhalla; and Albrecht Dürer’s fearsome woodcut “The Four Horsemen” from his folio “The Apocalypse.” (1498). The show was put on the schedule well before the pandemic hit, so the parallels between its subject matter and our current predicament are purely coincidental.

Two weeks ago I went to Russo Lee to see Lucinda Parker’s “Helens & Hood: Keep Safe Distance” and Sherrie Wolf’s “Memento.”  Parker’s dramatic mountainscapes of the volcanic Cascade Range remind us of nature’s destructive power, particularly in light of the eruption of Mount St. Helens forty years ago this past May. Wolf’s luscious still lifes of flowers, vases, curios, and postcards of famous paintings are elegantly voluptuary on the surface, but any still-life show called “Memento” is by definition in the lineage of the vanitas genre and the memento mori. The comely blooms remind us of the chilling couplet that opens Robert Herrick’s “To the Virgins, to Make Much of Time”: “Gather ye rosebuds while ye may/Old Time is still a-flying;/And this same flower that smiles today/Tomorrow will be dying.” This is why Piet Mondrian turned away from nature, which he equated with “the tragic.”  Contrasted with the withering and crumbling of all things organic, geometric abstraction seemed reassuringly perfected, pristine, inviolable.  The aforementioned Mary Henry also favored the geometric over the organic, but did not shrink from associations with the natural world.

So my art excursions have been pretty poignant lately, and maybe yours, such as they are, have been too. Art reflects the arc of history, and let’s face it, a lot of human history has been a downer. Who knows, maybe this is a time to take solace in more escapist fare: Jeff Koons’ “Popeyes,” “Incredible Hulks,” and balloon animals; or Takashi Murakami’s irrepressible smiley-face daisies. Lately I’ve been getting into Kiichiro Adachi’s eccentrically shaped disco-ball sculptures, which bring a smile to my lips during even the most depressing news cycles. Art can console, but it can also buoy. Surrounded by harbingers of life’s brevity, it’s instructive to remember the value of levity.