The Real Voter Fraud: A Fable
Column
by Bill Lasarow 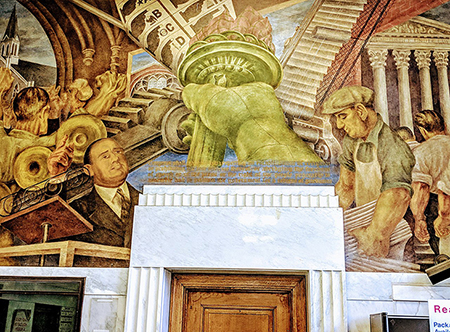 Ben Shahn mural at a post office in Queens

If this convinces you that I’m an alarmist, I sure hope that you are right. I wrote an article about post-Memorial Day America the day after watching that weekend’s outpouring of Covid-19 denial. In it I suggested that future historians may well name that opening-of-summer pleasantry in 2020 as the date from which the indispensable nation committed slow suicide. Sadly, less than three months later the trend lines bear me out. So far. The inevitable is not upon us, the national collapse remains reversible. But in my peripheral vision I see Gilead. Yes, I am alarmed — but motivated. This game is not over.

I put the suicide article in my drawer hoping it would gather dust and end quietly unnoticed in the trash. But as we approach 80,000 deaths in the interceding 2 1/2 months (right, just about 180,000 total), the picture has only gotten darker. The U.S. has in that time produced about as many cases of Covid-19 as there were in the entire world on Memorial Day. Please chew on that as millions of children are being shoved back into ill-prepared schools just in time for the fall flu season to get underway. By the time of the November election the number of cases project to about 8-9 million, the number of Covid-19 deaths will inflate to about 230-260,000. Add a larger than normal number of fatalities due to breakdowns in the healthcare system. . .well, here’s a little fable that has emerged out of the larger moral tale. You may question that I have dispensed with the animals, so perhaps it’s not really a fable after all. But no, these animals are real.

The Manchurian President on June 15th placed his partner plutocrat Louis DeJoy into the position of Postmaster General of the U.S. Postal Service. His mission, accepted with alacrity: curtail as many mail-in ballots as possible from being counted in November. His problem I venture you are familiar with already: There will be millions of fraudulent mail-in ballots cast leading to a rigged election. The solution: Simply remove as much of the processing hardware as possible from big city postal centers in order to slow down ballot tabulation for as long as possible; and cut out the overtime hours of the postal staff to stretch the count out for weeks. At least. The president’s legal team would take care of the rest. The bonus for Mr. DeJoy: to dismantle the Postal Service sufficiently that he could assume private control over the remnants. It would complete a privatization project that began 15 years ago. Promise kept.

But there has arrived the expected push-back from Congressional Democrats. They have, by the time this article reaches you, returned to Capitol Hill to pass a Postal Service protection bill and drag Mr. DeJoy before the House Oversight Committee, chaired by Rep. Carolyn B. Maloney (D-New York). The President’s surrogate has already countered with his kindly promise to at least hold off until after November 3rd. He undoubtedly would prefer not to return the processing hardware already removed; that detail of the drama has yet to play out. But his hope is to dismantle the Postal Service in order to save it. Perhaps for XPO Logistics; but I get ahead of our story.

Mr. DeJoy deserves credit for having parlayed his father’s failing trucking company into a half-billion dollar asset by 2014. The Office of Government Ethics reports that he currently holds tens of millions of investment dollars in companies that either do business with or compete with the Postal Service. Such conflicts of interest are, for this presidency, not a red flag but red meat. It makes Mr. DeJoy potential star material. The most predatory carnivores in this political Jurassic Park require a second term if they are to render a number of federal agencies sufficiently dismembered that they can be consumed by a consolidated group of business empires. Should Mr. DeJoy instead be indicted, his close friend does retain the ever present get-out-of-jail-free card, so he is quite at liberty to hold back investigators long enough to do what he has to do. Should that power of the pardon be lost with the election … well, that would simply never do.

From this perspective the pandemic came as an unexpected boon because it provides such a large pool of motivated, easily replaceable workers, a good portion of whom conveniently form the more fanatical core devoted to protecting the bloated Palpatine who happily feeds on the carcasses of those depleted loyalists who willingly sacrifice everything for their master. Their willing self-sacrifice, to speculate for a moment, indeed provides our would-be Emperor of the Galaxy with his greatest pleasure. Husks such as the father of Kristin Urquiza are not victims deserving of sympathy but delicious first term hors d’oeuvres that merely precede the main course banquet of the second term. But the second term is also essential because just one singular failure will bring with it personal punishment and historical damnation. And that is why it will be perfectly OK, if the crescendo of public outcry curtails the preferred manipulation and dismantling of the Postal Service, to shift over to Plan B, the preferred and more effect route anyway.

Remember this entirely made-up quote, because you may well hear something close to it, and if you hear it once you will hear it many times. We are all used to it by now. The appearance of certitude so jarringly at odds with reality that it replaces it in the minds of many is the whole point; that appearance of certitude is the one true element of genius possessed by Mr. DeJoy’s patron. “Everyone knows that the Democrats have gathered millions of fraudulent mail-in votes, so we have every right to offset that.” He will, of course, be asked what that means, probably also be presented with smoking gun evidence. And he will perhaps just walk away from the podium, or throw it back at the inmate-to-be: “You are the fake news, and it’s disgraceful. People are saying that you know exactly what that means but would never admit it. But you know.” Political campaigns have fooled voters with partisan materials that look official for many years — hell, Publishers Clearinghouse knows how to impress the credulous in that manner. And officeholders, above all the President of the United States, enjoy what is called their franking privilege.

If you received that $1,200 check from the U.S. Treasury in the Spring, you might have noticed a sharpie signature—not quite the same, but the idea is that the President’s signature or even his image can be placed on mailed documents that are official. Or may only appear official, so as to convey a directive, a promise, indeed even an order that looks and feels for all the world not just legal but compelling. For example (and this is just idle speculation of course), you might be registered to vote, so you receive your ballot, and promptly mail it in. What do you do (as a registered Republican) if you receive a subsequent mailer from the Office of the President, complete with image, signature and return envelope, directing you to complete and send in a second ballot? Perhaps the cover letter explains that your ballot was one of a certain number that were misplaced and not counted, and here is your replacement. Or it may not even be bothered with a cover story. As a registered Republican, you might even feel that you are in on the what has to be done; and my, isn’t this good clean fun in any case?

And so our story concludes with the feel good headlines of record voter turnout, particularly in Pennsylvania, Florida, North Carolina and a few other states. The Biden/Harris campaign may well uncover evidence of suspicious ballots, even some duplicates that suggest a larger problem. “So sue me!” After all of those stories about how mail-in voter fraud is virtually non-existent? So now when the Democrats lose, suddenly it’s because of the very voter fraud they and their liberal media allies previously denied existed? A disgrace. Lock them up!

For my part, I’m considering enrolling my daughter in one of those new synchronized dancing classes suddenly popping up everywhere. I’m certain it will please the President. No question at all it will impress his great friend, Kim Jong Un. And I’d like to keep my house.