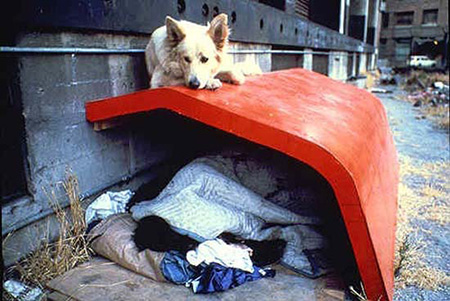 In the past few years Los Angeles and other big cities have seen an alarming increase in homelessness. In my neighborhood of Palms (which borders Culver City), the sidewalk and street leading to the local Sprouts market are lined with tents and cars  that are occupied by transients. In his recent exhibition at Hauser & Wirth, David Hammons called attention to the current crisis by filling the walkway and courtyard of the gallery complex with large clusters of empty tents stenciled with the words “This could be u. This could be u and u.” Yet, as forceful as it is visually, is a metaphoric installation enough? Can artists do more than just allude to the crisis? What can they do to actually help the homeless?

One approach artists have undertaken is to improve public perception of homeless people by creating positive, dignified representations of them. Among the first to do so was Andres Serrano. For his 1990 “Nomads” series, Serrano photographed homeless men and women posed classically before makeshift studio backdrops in subway stations. In 2014 he returned to the theme with “Residents of New York,” where this time the subjects are shown on the streets, many of them holding cardboard signs asking for money or shelter. Reacting now to a more dire situation than previously, the artist collaborated on the project with More Art [http://moreart.org], a non-profit that supports collaborations between artists and communities meant to inspire social justice. In their artist residency program volunteer artists spend time at shelters and participate in education and outreach programs. Other recent examples of artworks humanizing the homeless include the up close headshot photographs of homeless Angelenos by international photographer Martin Schoeller and portrait paintings by Phoenix-based Joel Coplin. Both artists spend time learning about their subjects’ plights through informal interviews, much as Jose Alvarez did when drawing fellow detainees at an immigration detention center.

As with current trends in rehabilitating the incarcerated, programs for artmaking have proven to be therapeutically beneficial to victims of homelessness. Some, in fact, have even succeeded in providing financial assistance. San Francisco’s Hospitality House [https://www.hospitalityhouse.org], which began its art programming in 1967, currently offers the only art studio for the homeless in the city. Homeless artists have exhibitions there, and they receive 100% of the proceeds from sales. Even more proactive in securing sales, the for-profit Boston-based company ArtLifting [https://www.artlifting.com] acts as a broker for artists who are homeless or disabled. In addition to securing sales to private collectors, they have placed artworks in corporate collections.

Perhaps the most urgent needs facing the homeless, as well as cities grappling with out-of-control homelessness, revolve around finding solutions to providing shelter. One artist who had a novel idea in this respect is Los Angeles-based Jon Peterson who, from 1979-83 installed a series of minimal sculptures that doubled as body shelters when placed around depressed areas of Los Angeles and other cities. Intended as guerrilla interventions rather than as vehicles towards curing homelessness, Peterson’s “Bum Shelters” could be considered effective as functional or participatory art, in that some who came upon the sculptures did use them as coverings for sleeping. Much to his surprise, Peterson was contacted by a North Dakota Congressman about developing them further to address his state’s homeless problem. The artist never responded as he was already engaged in new projects.

Ironically, Peterson’s “Bum Shelters” can now be viewed as precursors to real efforts being made to create small, efficient, affordable housing for street dwellers. In 2011, Oakland artist Gregory Kloehn — who had been living in a dumpster — began making 6-foot-square portable abodes using clean discarded garbage. Under the umbrella of the Homeless Homes Project [http://homelesshomesproject.org], the structures are either sold or donated to those in need. Commercial enterprises are now marketing “tiny houses,” portable structures ranging from about 100-400 square feet.

At present, the city of Los Angeles is planning to build suitable new shelters to meet the growing needs of the homeless population. In 2018, the city launched “A Bridge Home,” an initiative born from a new California law that permits transitional or “bridge” housing on land owned or leased by the city, such as vacant lots. One of its first efforts, El Pueblo, has received mixed reviews, with the chairwoman of the Urban Land Institute’s Los Angeles District calling it “a collection of trailers backing up to busy commuter streets and the 101 Freeway.”

Still, there is some hope ahead. Architects recruited by the Urban Land Institute are designing shelters with the goal of making them more livable than traditional ones. Towards the same end, I would like to see artists involved, whether their role is to spruce up living quarters, participate in the design process of actual facilities, or engage the homeless as changes are taking place. Local officials might do well, in fact, to follow the lead of the City and County of Denver, where a call has gone out for artists to create public art for an emergency homeless shelter. The mandate for the selected artists or artist teams is to “create comforting work that gives people at the shelter a sense of peace, relaxation and hope. Better yet, involve the people experiencing homelessness in the process of making art.”