Danaë, Siberia, and the Shower of Gold
Editors' Roundtable
Column by Richard Speer 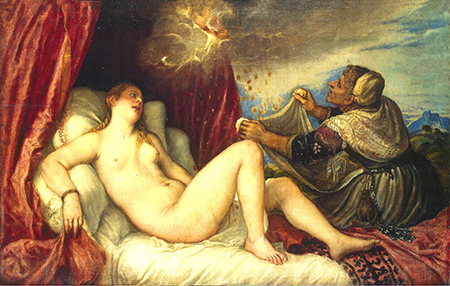 Recently at the Hermitage in St. Petersburg, Russia, I stood before Titian's ravishing mythological vignette, "Danaë" (ca. 1554). The painting illustrates the moment the eponymous princess was impregnated by none other than Zeus, king of the Greek gods — not by any standard methods of intercourse, but rather incarnated as a flurry of gold coins spilling between Danaë's thighs. So profligate is this divine deluge, the princess's elderly maid is left scurrying to catch errant coins in her skirt like a Las Vegas slot-machine veteran on the luckiest night of her life. This legend has been a popular trope throughout art history. Rembrandt's 1636 version is somewhat more chaste than Titian's, while Gustav Klimt's 1907 iteration is near-explicit in its eroticism. I found it apropos to behold such a lavish auric downpour at the end of a month in Russia, where gold holds a special place not only in painting, but also in statuary and architecture, its appeal grounded in the beauty of nature itself.

On my journey by rail across nearly 10,000 miles of Siberia, I felt as if I myself were being showered in gold, for autumn arrives early in Siberia. The leitmotif of my time there was the endless golden taiga (boreal forest) flashing past the train's picture windows, a seemingly unending blanket of birch and larch trees in the full splendor of fall color — alternating pockets of viridian and bright yellow that called to mind lyrics from Lara's Theme in "Dr. Zhivago": "Somewhere a hill blossoms in green and gold / And there are dreams, more than your heart can hold."

Whenever a human-made structure came into view through those windows, it contrasted pointedly with nature's effulgence. The houses, shops, and public buildings tend toward the ramshackle: paint faded, wooden beams time-worn, grim Soviet-era concrete cracked and sinister-looking. The long Russian winters are brutal on buildings, and upkeep is not a priority. In these hinterlands, nature's face is resplendent, while the constructed façade crumbles. It is no surprise, then, that by and large the only structures that capture and command the eye are the churches, with their eccentric onion domes and fairytale spires — gilded, lofty, proud. The taiga can certainly be beautiful, but owing to its vastness it can also be redundant. A birch forest in eastern Siberia looks basically the same as a birch forest in the Ural Mountains. In the midst of this homogeneity those sumptuous golden domes wake the eye up, equally captivating through the myriad moods of daylight, twilight and moonlight.

In the centuries before the Bolsheviks and latter-day Communists strove to erase "the opiate of the masses," it is easy to understand why the Russian peasantry, in those drab villages and selfsame woodlands, flocked with heightened fervor to Russian Orthodox churches, lured in part by the Lorelei of optical seduction that transliterates so readily into spiritual aspiration. The glint of metallic rotundas and belltowers are beacons promising not only respite from the arduousness and tedium of everyday life but also the possibility of transcendence. Once inside, churchgoers then and now are met with intricate mosaics and icons encrusted with gold, silver, and jewels. The history of Eastern Orthodox iconography in this region, in fact, stretches back more than a thousand years to the introduction of Christianity to what is now Russia. If such over-the-top depictions of venerated religious figures can boggle our eyes today, imagine how they would have transfixed pilgrims a millennium ago.

In Khabarovsk, a city in far eastern Siberia only 300 miles from the Sea of Japan, I stood in the shadow of the third-tallest church in Russia, Transfiguration Cathedral, as the late-afternoon sun turned its four golden domes into sentinels of blazing light. Weeks later and thousands of miles to the west, I visited St. Isaac's Cathedral in St. Petersburg. In a chapel within its southeast-facing corner, in the middle of two enormous malachite-clad columns, there is an iconostasis crowned by a gilded statue of Christ with upraised arms and voluminous robes, flanked by two saints. This is the old-school real deal. Whether it strikes you as grand, grandiose, or just plain gaudy, the pose and that eye-searing gold are the farthest an artwork could possibly be removed from the winks and nudges of postmodern irony. Even as secularism is on the rise throughout Russia and most of the Western world, and no matter what one's personal spiritual proclivities or disinclinations might be, it remains humbling to witness masterworks of ecclesiastical art and architecture unapologetically created to inspire wonderment and epiphany. I left Russia with an awareness of the line that connects the golden splendor of autumn, the allure of gleaming churches that dot the unbroken taiga, and that human capacity — perhaps need — to find in nature and in art the unspeakable experience of the sublime.