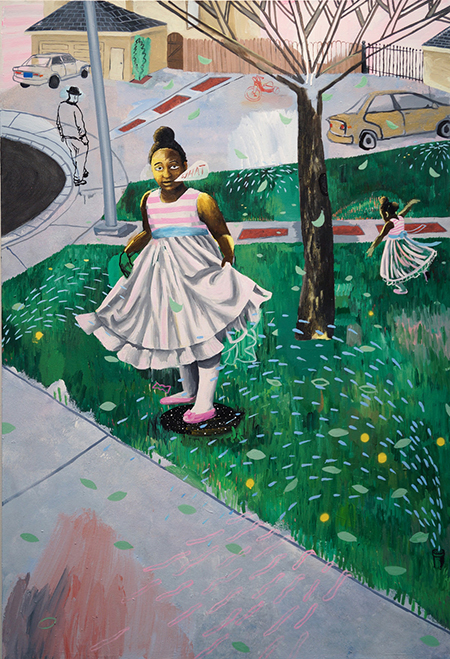 Cate White has been described as a ‘painter’s painter:’ someone who makes art more for fellow travelers in the art world than for the general public. Her recent show at Mills College Art Museum made me think that such a description sells White short. Her works, which include not only painting but sculpture, installation, books and drawings, are compelling, sometimes startling and often eerily beautiful. More significantly, they intimately reflect her lived reality, picturing the Oakland I’ve known for over 35 years. The place somehow still remains one of the most diverse cities in the country. White and I live at opposite ends of the city, in neighborhoods identified with large African American populations (though this is changing with alarming speed, as gentrification advances relentlessly). A European American, working class woman, she paints Black people: her friends, her partner, her neighbors. It seems to me that she paints for them, not the art world.

Make no mistake, her subjects also include white people. These are friends and relatives as well as anonymous figures like the cigarette-smoking, barbeque-apron-wearing guy featured in “Leisure” (the artist works from photographs; these are sometimes random acquisitions). But the paintings of her African American neighbors have been the subject of controversy. In an eloquent essay titled “what does this white girl think she is doing?” White describes both her desire to represent her lived experience and the problems that such a representation can stir up within the art world’s power hierarchy. As she puts it, “Identity is capital within the art world. If a black artist can capitalize on black identity, this will inevitably extend into a white artist getting in the game and taking power from the black artist. In a conversation with an artist friend of color, he voiced this fear and made the analogy of Elvis capitalizing on black music. His courageous honesty immediately shifted the conversation to our mutual goal of resisting the commodification of black oppression while seeing more artists of color rise up the art world ranks. In the broader cultural dialog, I suspect that the fear he named is operating as an unspoken subtext surrounding my art. If that is so, we should talk about that subtext.”

If, as the New York Times’ 1619 Project [https://www.nytimes.com/interactive/2019/08/14/magazine/1619-america-slavery.html] posits, the economic structure of our country for the past four centuries was built on a foundation of slave labor, the art world is part of that corrupt edifice. For so many reasons, White’s honest and heartfelt representation of her life is not just important as good art. It’s also a reminder of how urgently we need to continually correct course and communicate with each other — talk about the subtext, as she suggests.

So much of our daily experience is of division; of one side accusing the other of lies, failure, ill intent. Art has the capacity to create empathy and connection rather than deepening separation. It does no good to further the culture wars that are being cynically exploited by the power elite that increasingly calls the shots in the artworld, just as they do in the rest of our society. I remember a saying from my youth: visualize world peace. For me, that is what White’s work does.  By reflecting her reality, it describes what could happen on a broader scale. Imagine, her paintings suggest, a life that encompasses multiple realities and experiences.

In “Birthday Girls” an immense blue-frosted sheet cake (embellished with a tiny, surreal shark fin) is being eyed by five adolescents in bathing suits and towels, their dramatic poses borrowed from works by 17th century artists she admires, such as Gerard von Honthorst and Artemisia Gentileschi. The stylized blue drops cascading from them suggest that they just got out of the water. “Cul de Sac Girl,” a tender image of a Black child of 9 or 10, in pink shoes and a pretty party dress. Her hands spread its ruffled skirt as she stares out at us from a tiny, tidy suburban lawn, a dialogue balloon appended to her mouth filled with the single word ‘what?’ as sprinklers bathe her in the same stylized blue drops of water. Like a Florentine Renaissance painter or contemporary graphic novelist telling a long story in a single frame, White adds a tiny second version of the girl in the background.

Both of these paintings represent the artist’s ability to see the extraordinary magic in every moment of life, coupled with a desire to paint all of it. Despite their beauty, they made me sad — reminding me, as they do, of how hard we have to work to prevent a vast, no holds barred manipulation of our emotions and desires, our beliefs and fears. When it is all but impossible to find the truth anywhere else, it’s art’s job to keep exposing it. There are a lot of ways to do that, and White’s work is surely one of them.