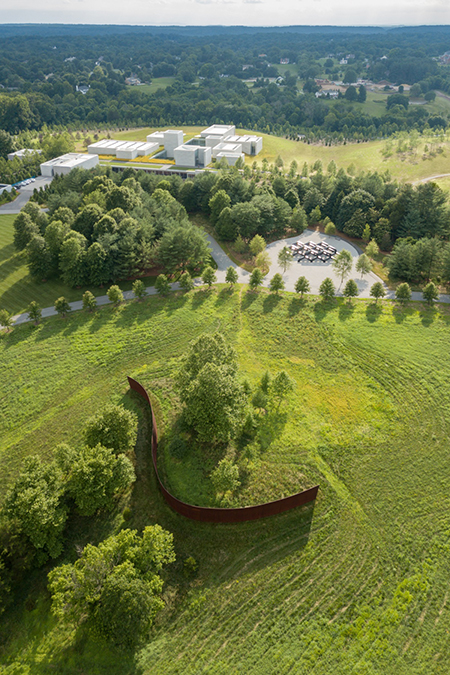 Art critics, yours truly among them, are every bit as contradictory and hypocritical as the lay public, if not more so. This became apparent to me last month as I made the rounds of several museums in Washington, D.C., and found myself confronted with my double standards regarding museums and social media. I’ve written before in these cyber-pages [http://www.visualartsource.com/index.php?page=editorial&com=media&pcID=17&aID=3223] about the scourge of art-selfies, which I believe trivialize both the artist’s intent and the viewer’s relationship to the work, turning art objects into “interchangeable props in an ongoing self-promotional campaign.” My fallback position is essentially reactionary: that the intrusion of digital technology distracts from and commodifies artwork, leaching mental energy away from aesthetic contemplation and injecting solipsism into the viewer/art equation. Gallery-goers would be well served to leave their cameras at home if truly melding with art is their goal.

This admittedly crotchety position was in forward in my thoughts when I visited the National Gallery of Art, pushing my way past tourists snapping selfies in front of the collection’s not one but two Brancusi “Birds in Space,” a diamond-shaped Mondrian canvas in the same room, and the drip-a-licious Jackson Pollock “Lavender Mist” (1950) in a gallery dedicated to AbEx. My knee jerked in predictable ways, my inner “tsk-tsk” activated at such a gauche disrespect of these canonical works. I didn’t mind the scene as much at the National Portrait Gallery, where a line forms for folks to take pictures of and with Kehinde Wiley’s insta-hit portrait of Barack Obama. I found it touching, the throngs queuing up for their moment with the former President’s image. (I imagine my reaction will be different once the inevitable portrait of Donald Trump goes up — hopefully after only one term.)

My hackles were raised, however, in the Museum of Natural History, home not only to kid-pleasing displays of dinosaur bones, but also the vaunted and supposedly cursed Hope Diamond, housed in the Harry Winston Gallery. To describe the goings-on within this gallery as a mêlée might be putting it too mildly. Children ran through the space willy-nilly, indiscriminately pawing the gemstone display cases, covering them in greasy fingerprints, while their parents ogled the Hope almost exclusively through the screens of their smartphones. Would any of them remember the actual midnight-blue hue of that diamond, I wondered, since they had seen it only through a screen?

To my surprise, my attitude took an unexpected about-face when I arrived at the Glenstone Museum in nearby Potomac, Maryland. I had read the divided critical opinion [https://www.washingtonpost.com/entertainment/museums/this-new-museum-doesnt-want-instagram-or-crowds-does-that-make-it-elitist/2018/08/30/eaf0028a-aa2b-11e8-8a0c-70b618c98d3c_story.html] about the Glenstone’s recently completed expansion and was interested to see what I thought of its tightly controlled strategy for redefining the museum-going experience. There was a conspicuous preciousness to much of what I saw there, from the landscaping’s intentional contrast between manicured lawns and plots overrun with weeds, to the stilted formality of the docents, dressed as they were in futuristic gray uniforms reminiscent of the sci-fi film “Gattaca.”  But the area of greatest Big Brother-like control was the total prohibition of photography inside the art pavilions. Snap away all you want of the drab exteriors by Charles Gwathmey and Thomas Phifer, but keep those cellphones tucked away when you’re inside.

You’d think I would eat that up, wouldn’t you, this high-minded compulsory ban? Wasn’t this the pure, technology-free paradigm I had advocated for years? Well, yes, it was, except I hated it. I hated it because it turns out that I am one of the guilty-as-charged. I never realized the extent to which I myself am a slave to the digital until the Glenstone disallowed my freedom to take pictures. Mind you, I’m not a selfie slut, but I do like to zoom in on details — closeups and shots from odd angles you never see in reproduction: the splashed paint of a Joan Mitchell gesture shot from an angle emphasizing the energy and directionality of the flung, thinned-out oils; the lacy ruffles of a gown worn by a John Singer Sargent sitter, highlighting the master’s gift for telegraphing intricate textures with astonishingly economical brushstrokes.

Getting up close and personal with an artwork through the conduit of photography is a way to engage more intimately with it and see it in a fresh way. I never realized I felt this way until I stood in the Glenstone’s antiseptic concrete viewing rooms, feeling bereft and impotized without my trusty phone-cam. It occurred to me that even though art selfies aren’t my style, they could be a different kind of viewer’s connection with art that might otherwise be inaccessible. Maybe photographic engagement heightens rather than deadens our investment with the work. I stood there, resenting the museum’s policies, words like “draconian” and “Orwellian” filling my head. In the aftermath of that visit I’m reconsidering my stance. Perhaps it’s time to jettison my stodgy, technophobic pooh-poohing, join the 21st Century, and embrace the digital. Old dogs can learn new tricks — why not middle-aged art critics, too?