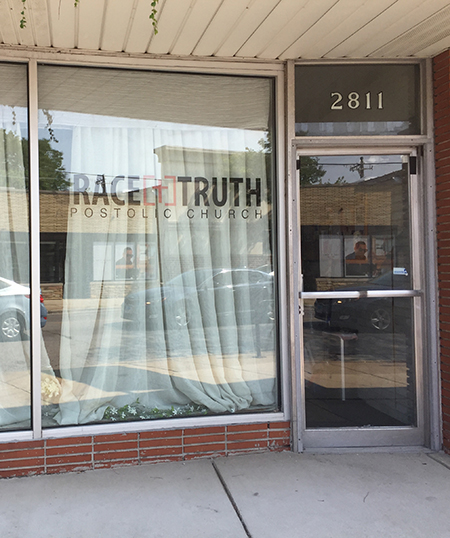 In the morning on my way to work, driving east to the Chicago lakefront, plotting how to engage young minds with art on a summer day that begs all classrooms to close, I pass through city neighborhoods. Indian, Caribbean, Orthodox Jewish — it changes from block to block. I pass men in skullcaps, women in colorful robes. Hebrew text drips down a darkened window like loosely knit black lace. A guy selling insanely cheap mangoes and tomatoes out of the back of a truck barters with a woman in an orange turban. She's a foot taller than he is, with the posture of a queen and a loud indignant voice. A couple of blocks away there's a line at the taco truck, but in the afternoon, when I want tacos, the truck is gone. Briefly I wonder if I should cancel class and pack the kids in my car and drive them around to smell all this. But it's life not art, and not even especially noteworthy in or around Chicago. Then one morning I notice something truly exotic.

Traffic is stopped on Touhy Avenue. A bus has stalled, maybe. Or someone has dropped their muffler in one of the potholes that appear like mushrooms overnight. The delay gives me time to look around, and to my left I see an abandoned storefront in a row of them whose window has been newly plastered floor-to-celling with a glossy ad for Rag & Bone. It looks like one of those coming-soon-to-this-location promotions, but the likelihood of this hipster New York clothing store opening a branch here is beyond remote; this must be an ad. Even then, I wonder. To whom are they advertising? The man in the prayer shawl, rushing by holding a scroll? The taco guy? Surely not the queenly woman in the orange turban. She knows her outfit could not be improved.

I turn to my right to reorient and there's my old friend, the Grace + Truth Apostolic Church, shoved into the space of a laundromat. Faded black letters pasted on the murky window promise an order higher than retail, some synthesis of grace and truth and art and life, if only the lights were on. I've never seen anyone enter or leave. Then the jam breaks and traffic begins to move.

That night, I look up Rag & Bone store locations. Just to be sure. Maybe there's a movement afoot, something I should know. But, no. There are the usual NYC sites — Soho, Brooklyn, Christopher Street. Also, Brentwood, Houston. Dubai, Tokyo, London. There's one Chicago store, on the Gold Coast, nine miles and a lifetime away.

The next morning traffic snags in the same place, allowing me to study the larger-than-life headshot of the guy in the poster. He's gaunt, a stubble-faced white man in retro shades, young and opaquely handsome, the only hipster on the block. He hovers shinily over his empty store like a mirage in the heat. Across the street, the Grace + Truth Apostolic Church stands her ground. The windows seem to talk to each other.

"Rag & Bone," the north side of the street says to the south, introducing himself.

"Grace and Truth," the south replies, put off by the ampersand. "May I just say? You are no Rag. And Bone's a bit of a pose as well."

"I beg your pardon, Bone means true," Rag & Bone says, defensive, thinking, that was the whole point of the name.

"Should be, but I sense your soul is fat."

"Nothing about me is fat. Please don't sell me short."

"I'll sell you shorts," says Grace, surprising Rag & Bone with her bawdy tone. "You come on down to the Epiphany Thrift Store, in my basement, and try some on. Rags I mean, you faker. I'll sell you shorts like you wouldn't believe."

"Ha ha," Bone says, off balance now but considering it, thinking how well his muscled calves would look in vintage plaid Bermudas.

"Rags to riches," Grace says, also thinking of his legs. "Truth will tell," she adds, "and Grace will set you free." Then the traffic breaks and I drive on.

When I get to work I aim my car toward the water and park. The lake lies silvery now in the early morning, cool like the man in the aviator shades. Later, while I and a clump of discontented youth sit trapped in a windowless room shivering in the air conditioning under fluorescent light trying to care about art, the lake will turn tropical green.