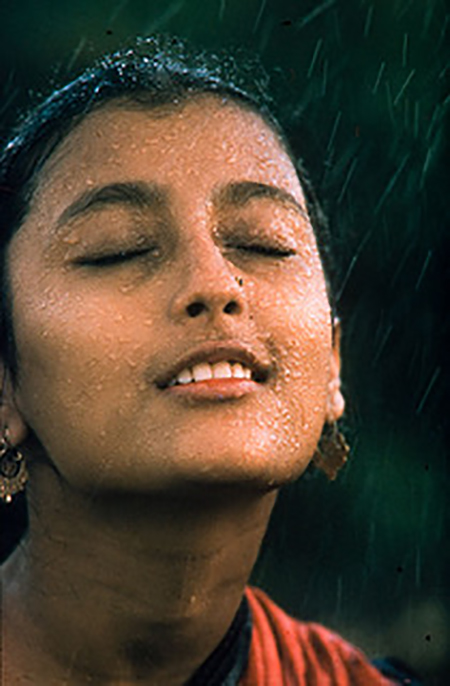 The in-between zone separating carnal from religious ecstasy is perhaps nowhere more piquantly depicted than in Gianlorenzo Bernini's "St. Teresa in Ecstasy" (1647-1652). Housed in a chapel within the Santa Maria della Vittoria church in Rome, the sculpture portrays its eponymous saint in the throes of godly possession, her heart about to be pierced by an arrow-wielding cherub representing divine revelation. Swooning backwards upon a cloud (no mere fainting couch will suffice for this caliber of rapture), swathed in vast folds of fabric, foot dangling suggestively, head tilted backwards, lips parted, and those eyes — close-lidded, presumably rolled back in their sockets — she is the very picture of abandon and surrender.

I have long found common ground between this masterpiece of the Italian Baroque and a pair of 20th century photographic works. While these modern pieces do not share quite the exalted pedigree of Bernini (and really, who apart from Michelangelo does?), they nevertheless capture a similarly high-keyed emotional state.

The first is the 1960 image "Monsoon Girl" by New Zealand photographer Brian Brake (1927-1988). Brake presents a sari-clad, nose ring-adorned young Indian woman in the grips of some assumed euphoria: her eyes closed, red lips parted to reveal beautiful teeth, her face and hair kissed by the warm rains of the subcontinental monsoon season. Except that in actuality, it wasn't rain, it was water poured from a watering pail by an assistant. And the nose ring was affixed with glue according to the sitter, Aparna Sen, who went on to become a distinguished figure in Indian cinema. Brake took some flak for staging the scene, but authenticity has never been art's strong suit, and this series sat on a tenuous fault line between documentary and fine-art photography. His created vignette conjures a vision of exoticized, eroticized bliss of the sort that would most certainly not pass muster in postmodern academic critique; yet this image has become archetypal.

It reminds me of another image taken in India, this one by Portland, Oregon photographer Paul Dahlquist (1929-2019). It's a portrait of Bashir Ahmed Gagalu titled "Bashir in the Surf," taken in Goa in December ,1987. A beloved figure in the Pacific Northwest, Dahlquist, like Brake, straddled photojournalism and fine art. He chronicled the habitués of the Portland art scene for decades, snapping street scenes and portraits at First and Last Thursdays. He was also a powerful voice in our local LGBTQA culture, well known for tasteful nudes in the Herb Ritts and Tom Bianchi modes, as well as for tableaux of twosomes, threesomes, foursomes, and moresomes in acts of full-fledged sex. He had a lively and randy photographic eye. "Eye candy is my favorite drug," he told me in 2009, celebrating his 80th birthday, "and I love to O.D." Unlike Brake's "Monsoon Girl," Dahlquist isn't faking anything in his portrait of Bashir. A young man is luxuriating in the Indian Ocean, no assistants or water pails required. But losing yourself in the photo you can almost hear the happy chatter of other revelers along the strand, the lapping waves, palm fronds in the spice-scented breeze, and you wonder what the relationship was between the photographer and the photographed. It is a riddle within an idyll. But Dahlquist has managed to convey a state of mind akin to what we see in Bernini and Brake: the charmed estuary where the voluptuous and transcendent meet, the delectation we imagine in kingdoms of "luxe, calme, et volupté" — luxuriance, calm, and pleasure — as portrayed in the poetry of Charles Baudelaire and the painting of that title by Henri Matisse.

Clearly, this is not the human condition in toto, but a slice of life channeled through an artist's selective vision. Does it matter whether Bernini's sitter is being visited by God or having a particularly transportive orgasm? Is it relevant that Aparna Sen's nose ring was glued on or whether there really were spices floating upon the breeze as Bashir splashed in the surf? This is one of art's many enigmas: You can answer the riddles however you want.