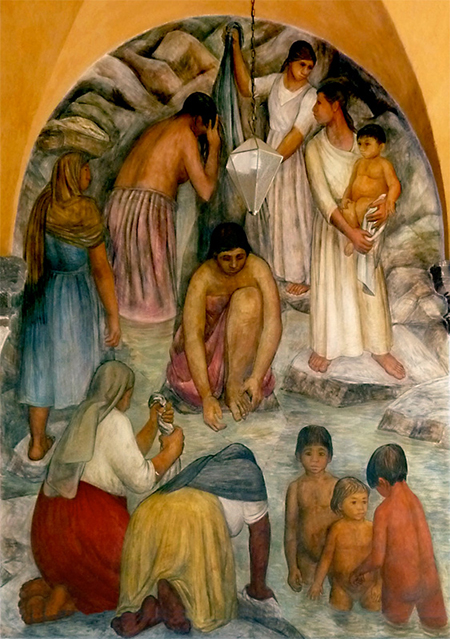 I recently stumbled across an extraordinary mural in San Miguel de Allende, Mexico painted in the 1940s by one Eleanor Coen. Imagine my delight in discovering that this remarkable fresco of women working, titled "Las Levanderas, The Laundry Women," a subject long favored by 19th century Realists (Daumier, Courbet, Degas, Morisot etc.), was painted by an American, and a Chicagoan at that! Ms. Coen was a student and teacher at the School of the Art Institute, and a leading painter in the 1940s and 50s, but this mural tucked away in san Miguel represents a key moment of her career which should be lauded in the history of public art. Coen's commitment to the theme of women's labor, coupled with ideas of class and race embodied in the types of figures she includes, is outstanding. And hers is a contemporary story still, as the invisible labors of working women around the world desperately warrant attention. In the populist days of Mexican muralist painting, Eleanor Coen, a young American woman from Normal, Illinois stepped up and joined the ranks of predominately male muralists from Mexico to boldly offer a significant work giving voice to everyday working women. Brava.

Coen's mural is located in a former university art school, Las Belles Artes, first built in the 18th century as a convent for the daughter of the de la Canal family (the theme of women's limited social options already prevails). Today it's a cultural mainstay of San Miguel. The mural is one of several, including a work by David Alfaro Siqueiros, that adorn the walls of the building's magnificent open interior courtyard. In the mural, Coen composed a circular arrangement of women and children — positioned around a centrally kneeling figure who dips a hand and foot into a shimmering pool surrounded by a rocky, cubist landscape. The figures on the left side of the composition are seen from the back, while the figures on the right face us. The division recalls a last judgement tympanum. With the central figure washing her feet, framed by a blue cloak that dangles from the hands of a woman above, the Christian iconography is unmistakable. But these are not saints, or gods or their blessed followers, but rather women wringing out their laundry, washing their hair, and caring for their children. Their dignity is conveyed through the power of their bodies: broad backs, thick limbs, big feet and strong hands. They are reminiscent of figures from other Mexican muralists, Orozco for instance, who Coen greatly admired. At the lower left is the only figure that looks directly out at us, a young boy from a grouping of three children whose subtle range of skin tones echoes the many brown bodies of the women who nobly labor around them.

Coen and her husband, fellow artist Max Kahn worked for the WPA (Works Progress Administration) before heading down to Mexico in the 40s. This government funded art program, the likes of which we can hardly imagine anymore, was a New Deal project that valued artists as important contributors to society. It emboldened Coen to go Mexico in 1942 upon receiving the SAIC James Nelson Raymond Traveling Fellowship. Only 26 years old at the time, she was the first woman to win the honor. Many Chicagoans were already making pilgrimages to San Miguel; they still do. Its cultural tourism today is complicated by ex-pats building large private homes, and an art scene that, with very few exceptions, is woefully driven by Sunday painters. But in 1942 it was an entirely different picture. Coen's commitment to try to know the people whose home she made her own for a time is clearly evident in her choice of the mural's subject.

The current polemic around racial stereotyping and cultural appropriation that gets raised when a white artist takes up the subject of brown bodies can't be ignored. But as one of my colleagues pointed out, the manner in which Coen presents these women leads us to see them as full human beings, leaving the possibility for empathy. Like the excitement surrounding last year's award-winning film, "Roma," the physical appearance of the lead actor as nanny and her heroics within the story relate to Coen's honorable depictions of these simple, hardworking and often overlooked women. Coen bravely took on the theme 75 years ago.

At a recent luncheon in downtown Chicago, House Speaker Nancy Pelosi took up the question of how and where we see women's bodies represented in art. She quoted from Abigail Adams writing to the D.C. crowd in 1776, "I desire you would remember the ladies." Pelosi then noted the sculptures of Rosa Parks and Sojourner Truth, two of the very few statues of women of color, or women in general, dotting the nation's capital. She applauded the value of role models that inspire young women to take up leadership positions, referring to women's representation in public art as a means to convey that message. Indeed, in the same remarks, Pelosi asked the crowd to recognize and thank the wait staff — the majority of whom were women of color. But Chicagoan Coen was already on top of this issue decades ago, making art that recognized the women who toil for the well-being of all. She did this in a land not her own, respecting difference while celebrating that which unites us.