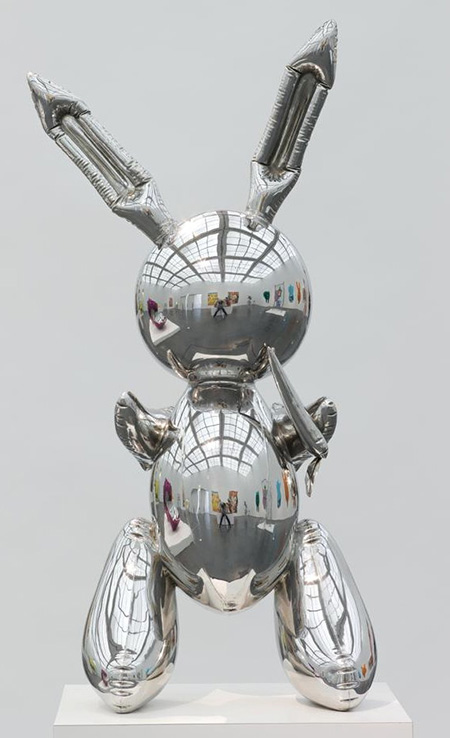 Sometimes one has to take a stand against the banal and pointless. I refer, of course, to the $90,075,000 sale of the not-latest but apparently greatest (at least as determined by the group-mind wisdom of the art market) of Jeff Koons's balloon-animal sculptures, "Rabbit" (1986). The stainless steel, 41-inch-tall lagomorph, modeled after a swimming-pool toy, is one of an edition of three, supplemented with one artist's proof. It has a curious provenance as well. The painter Terry Winters bought it from Sonnabend Gallery in 1986 for $40,000, selling it a few years later to S.I. Newhouse, owner of Condé Nast, for a cool million. Newhouse's heirs have just reaped an enormously larger windfall, earning a return on investment of $89,075,000, give or take (minus commissions). Even more piquant in this tale of financial greatness are the players: the broker was New York dealer Robert Mnuchin, an art collector himself, and the father of the current Treasury Secretary Steven Mnuchin. The buyer, it has been revealed, is the hedge-fund billionaire, art collector and philanthropist Steven A. Cohen, whose modernist and contemporary "trophy" pieces may someday furnish a private museum, probably in his home state of Connecticut.

The staggering amounts of money being invested by the 1%, as personified in this story, cannot fail to appall and aggrieve (though not surprise) those of us who regard Koons as a huckster in the Trumpian vein. He is a direct aesthetic descendant of Andy Warhol (currently the subject of a large retrospective at San Francisco Museum of Modern Art) and Marcel Duchamp. Their joint legacy that art can be, respectively, whatever sells and whatever the artist decides has had a liberating effect over the last century, but not one without the dismaying downside of making market values (and public relations, fashion and advertising) the drivers of the art world more than aesthetic quality. "Que sera sera," so sang the late Doris Day.

My low opinion of Koons falls decidedly into the grumpy-codger Robert Hughes vein: "He has the slimy assurance of a blow-dried Baptist selling swamp acres in Florida … [Y]ou can't imagine America's singularly depraved culture without him." In her recent New Yorker profile of the artist, Andrea K. Scott concludes that he is both expensive and great. Kirk Varnedoe, the late art historian and MOMA director, wrote in Artforum in 2003: "It seemed to me instantly, by involuntary reflex — and it still does by long reflection — that this bunny is one of those very rare hits at the exact center of the target." Scott continues: "It became an icon of eighties excess (and thus, of white male privilege): fuck like bunnies, make more money, the one with the most toys wins."

Alexander Rotter, a Christie's executive, goes a step further. Here he is, quoted in a Japan Times Culture/Entertainment article: "Bunny" is the antithesis of "the perfect man," Michelangelo's "David," which was "carved by one of the greatest artists of all time with a chisel, out of one block of the purest white marble. It's the end of sculpture. It's the anti-'David,' as I call it," he said, referring to Michelangelo's masterpiece. "You can't go any further away from 'David,' still being figurative and a traditional sculpture."

It's a telling comment, clever in its false-equivalency logic: Koons = Michelangelo, just with the polarities reversed. In the context of our antiheroic, cynical, even subservient era, still young idealists have been socialized by postmodernism into bitter self knowledge and impotence. Sir Kenneth Clark, in his 1969 BBC series "Civilisation," remarked that great art like that of the Florentine Renaissance comes from periods of cultural confidence. The postmodernist riposte to this would be a catalogue of the crimes of all civilizations, including the moribund American empire, with its dirty laundry now triumphantly aired for the world to see. There's no question but that the western liberal democracies have recently faltered. But can art and civilization be saved from that souless alternative to humanism, the brain-dead worship of money and might, wedded to theocratic fantasies, before it all ends with a nuclear bang or an environmental whimper? Is our late-capitalist decadence still amusing, really? I used to mock the phrase 'late capitalist,' in the simpler times of the triumphalist post-USSR 1990s. Back then we thought it safe to fantasize.