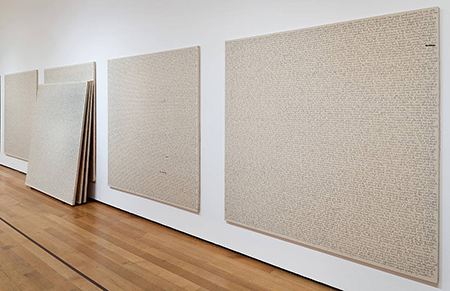 Text-based art can often be tedious to experience. When used in an installation format that presents rows and rows of written information intended to be read word for word, for example, it can be nearly impossible to decipher meaning because, literally, there is "too much information." Walking through an art exhibition is physically and structurally different from reading a book. Logistically, a presentation of small fonts in large masses across gallery walls can counterproductively inhibit our abilities to perceive form and content.

Fortunately, some recent exhibitions in Los Angeles demonstrated how to exhibit text-based art without compromising the potential for viewer enjoyment and enrichment. Concurrent showings by two distinguished pioneers of conceptual art, the recent 50-year retrospective by Allen Ruppersberg at UCLA's Hammer Museum [see Michael Shaw's review] and recent paintings by Mel Bochner at Marc Selwyn Fine Art, showed that reading in the traditional sense (word by word) is not required.

Throughout his career, Ruppersberg has examined relationships between words and images, with much of his inspiration and source material drawn from mining the histories of literature, visual art and popular culture. Although his retrospective included paintings, sculptures, and photography, it is in his early and recent installation work that he excels at presenting text in unconventional ways that are both visually engaging and intellectually fulfilling. This is particularly exemplified in two installations that use highly acclaimed literary works, Oscar Wilde's 1890 novel "The Picture of Dorian Gray" and Allen Ginsberg's 1954-55 poem "Howl," as points of departure for musing about the monumental roles that each work occupies within literary history.

Originally installed in 1974 at Claire Copley Gallery in Los Angeles, Ruppersberg's "The Picture of Dorian Gray" consists of 20 large-scale canvases on which the artist used markers to transcribe by hand the entire text of Wilde's novel. Over the years, this work has been installed in varied configurations, yet the constant has always been that the dimensions of the canvases combined exceeds those of the designated wall space, a strategy that calls attention to the enormity of both the author's and artist's undertakings. In every instance, several of the canvases are hung conventionally on the walls, while others remain on the floor, leaning in stacks against some of the hung canvases. With much of the text obscured, reading it in its entirety is impossible, so we experience it primarily through our knowledge that it exists. Rather than getting lost in the details of the novel, which we could do by reading the book or even watching it as interpreted in movie versions, we are encouraged instead to think about such topics as the novel's impact and the artist's act of transcribing it.

Ruppersberg has acknowledged that the labor-intensity of his process is in fact related to the idea that the novel is about the passage of time as reflected in aging, which occurs in a fictional painting, Dorian Gray's self-portrait. Considered within the context of when it was first created, Ruppersberg's installation is also reflective of the art of its own time, the early 1970s. By the late 1960s, artists such as Richard Serra, Robert Morris, Eva Hess and John McCracken were creating artworks that lean against a wall, blurring the boundaries between painting and sculpture. Additionally, when viewed from a distance, Ruppersberg's canvases bear a distinct resemblance to contemporaneous paintings by Agnes Martin, where faint abstract marks are methodically arranged in repeating horizontal registers.

Ruppersberg's homage to Allen Ginsberg is titled "The Singing Posters: Allen Ginsberg's Howl by Allen Ruppersberg (Parts I-III)" (2003/2005), a paper wall mural that takes the form of a grid made up of Day-Glo posters printed with phonetically transcribed passages from Ginsberg's poem interspersed with actual event posters. To simulate the rhythms of the way Ginsberg would read his poem in public performances, Ruppersberg varied font sizes and arranged the text in configurations that mimic the actual emphases and pauses in Ginsberg's recitations. For those wishing to dig deeper into "Howl" by listening to a vintage recording of the poet performing it, seating with headphones was included in the installation. In both temperament and concept, "The Singing Posters" is perfectly suited to Ruppersberg's memorial to Ginsberg, since one can easily imagine the installation's psychedelic posters as once plastered on the streets of L.A.'s Venice, San Francisco's Haight/Ashbury or New York's East Village neighborhoods where Ginsberg emerged and rose to fame in the 1950s-60s.

Whereas specificity of meaning is essential to understanding Ruppersberg's installations, Bochner's recent "Blah Blah Blah" paintings elicit a more visceral response, in that their subject is an ambiguous word that Bochner approaches simply as "an expulsion of breath which can mean anything, everything, or nothing." Painted in oil on velvet and organized into three or four rows per painting, each 'Blah' is simply a springboard for a joyful foray into the animation of paint, as the interactions of brush gestures playfully anthropomorphize each letter. In one example, a bright yellow 'A' seems to tickle the base of a neighboring red 'L' while, in a black-and-white version, a gray 'A' and 'H' are hardly distinguishable from the lush density of the paint that renders them. In the companion "Ha Ha Ha" series, concept and form occupy equivalent positions on the compositional playing field. In these screenprints painted over in oil, white clusters of the word 'Ha' echo the sounds of laughter emerging from different sections of dark black fields, as if emitting from isolated areas of a room. As in the "Blah Blah Blah" series, smudged and dripped paint yields sumptuous surface effects that can be appreciated on a purely aesthetic level. Although much of Bochner's early work is considerably heady, his late period is turning out to be exuberant and fun.