This Must Be the Place
Editors’ Roundtable
Column by Robin Dluzen 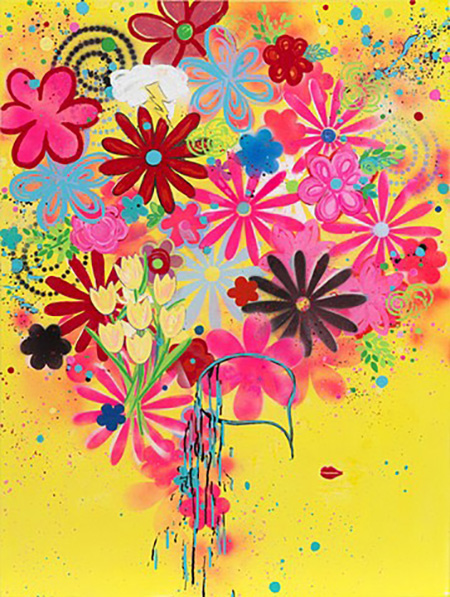 [Note—James Yood was among VAS' original contributing writers, and wrote regular columns for us until his untimely death last year—Ed.]

On the final day of his life, James Yood brought home tulips for Lorraine Peltz. After almost 30 years of marriage, Yood died suddenly in April 2018; in the months that followed, amidst her shock and grief, Peltz agreed to a survey exhibition of her paintings at the Ed Paschke Art Center. That exhibition, "This Must Be the Place," opened May 4, 2019, a little over a year after her husband, a renowned art critic and historian, passed. "This Must Be the Place" surveys 25 years of autobiographical painting, bookended by "Time Out," a tightly-painted still life from 1996 depicting a x-shaped composition with lipstick and a tube of paint balanced by a pen and a projector slide; and "And It Was All Yellow," Peltz' most recent painting from this year — a loose, gestural burst of flowers and dripping paint, featuring that final bouquet of tulips.

Peltz and Yood, the artist and the critic, moved in tandem through Chicago's art world over the course of their marriage. The two were also educators, with the good fortune to have taught at the same institutions twice, first at Northwestern University and then at the School of the Art Institute of Chicago, where Yood was employed until his death, and where Peltz teaches today. In her artist talk on May 4, Peltz spoke about how her husband would come out of his home office with a draft for her to read. Likewise, Yood would accept his wife's invitation upstairs to her studio, joking that he'd have to "charge her by the word."

Peltz' practice encompasses the "multifaceted experiences of women" with paintings full of florals, chandeliers, lip prints and high heeled shoes, addressing fashion, the domestic, sex, pleasure and work. The artist spoke about a period in the early 2000s, when high-end women's shoes were her favored subject matter. At first, Peltz explained, she purchased designer shoes at department stores, setting them up in the studio and making paintings of them before returning the shoes to the store. Shortly after, Peltz' then gallerist, Susan Gescheidle, took advantage of a connection at Nordstrom's, securing the painter an in-kind grant of 10 designer shoes of her choosing. The resulting paintings are exuberant and floral, the delicate silhouettes of the stiletto heeled boots punctuated with cartoon-like speech bubbles. In lieu of words, the bubbles contain imagery of their sentiments: rainbows and smiling mouths in some, tears or raindrops in others.

Throughout her practice, as is evidenced in "This Must Be the Place," Peltz has illustrated the highs and lows of experience within the framework of the decorative. During the past ten years chandeliers have been her subject matter of choice. During her talk, Peltz answered an audience query about the origins of this prevalent imagery, which again had deep roots in the artist's biography. Peltz' mother, an immigrant and holocaust survivor, took great pains bringing to her new home the character of the home she left behind. Upon her mother's death, Peltz looked at the chandelier of her childhood home with new eyes, recognizing that it quite literally "illuminated [her] family life." In "Home" (2010) the chandelier is stenciled in black paint upon a vibrant white, pink and blue striped ground. This fixture seems to absorb light, rather than emanate it, and with drips running down the canvas, it feels as though it's slipping away.

With this knowledge of Peltz' conceptual processes, Yood's presence in this exhibition abounds. The love, hope, family and (ultimately) loss are about him, too. Quotes from Yood are recreated in vinyl at the exhibition's entrance, including his sentiment from the Outsider Magazine in 2005 that " … where you live is the second most important decision you make as a human being … " Peltz clarified further that the first is your choice of partner. Yood was a steadfast champion for Chicago, for the thoroughly Chicagoan Ed Paschke Art Center, and not surprisingly, wholly and passionately for Peltz. In "This Must Be the Place," so much of what Yood dedicated his life to convenes here. And for Peltz, it's the manifestation of "the collaboration that was my life with Jim."