My Own Private Artspeak
Editors’ Roundtable
Column by Richard Speer 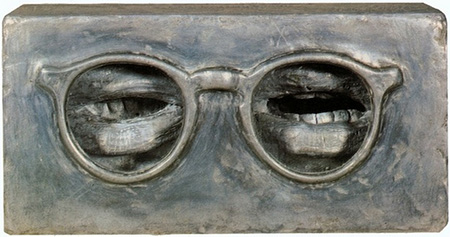 Everybody claims to hate artspeak, and most of us art critics will offer full-throated denials that we sink to using it. I'll admit, though, that anyone who's written about art for nearly twenty years, as I have, is bound to use certain words and phrases more frequently than others, and many of these words would strike lay ears as esoteric. I keep a running list of words I overuse. It started as a funny thing, something I'd occasionally troop out for the amusement of fellow writers. Nowadays I revisit the list to make sure I'm not slipping into easy redundancy.

I like to think my arts writing does not allow too much artspeak to get through the sieves. I'm not the type to advocate "advancing narratives based on effectively prelapsarian approaches to phenomenological inquiry." If a concept climbs several rungs up the ladder from concrete to abstract, it detaches from the physical world that grounds us. So in my wordsmithing I strive to keep at least one foot planted on Aristotelean terra firma. Probably my mind is wired this way because my fundamental education was not in art history per se but in journalism. The five W's came first; aesthetics followed. Also, I love music — especially piano music and opera — even more than I love visual art (I wrote for many years for "Opera News" and still cover the Portland Opera for "The Oregonian"). Music — with its cymbal crashes and rumbling timpani, the reedy textures of woodwinds, the throbbing of an opera singer's vibrato — strikes me more viscerally than most visual art does. I don't know how many times I've heard artists say they're moved to tears or goosebumps by certain music but hardly ever by visual art. I think that because music is my first love, my prose stays more rooted in the physicality of sensation. At least I hope so.

I do strive to avoid an over-reliance on words such as "liminal," "oevre," and "dialectic." My eyes glaze when I read artist's statements that begin by suggesting the artist's work "is concerned with space, time, memory, and identity." If I have to read the first sentence in a press release three times, then mentally diagram it before it makes sense, I'm unlikely to read the paragraphs that follow.

But I do have my habits, and they live on my list. I admit to enjoying the use of Latin and French prepositions: "qua," "à la," and "vis-a-vis." I like to say certain artists are "in the vein of" or "hail from the lineage of" other traditions. I tend to goo over work that transports viewers into "languid reveries" or "dynamic equipoise," or that it "reconciles polarities" by suggesting a "fantasia," "phantasmagoria," or "grotesquerie." I have a taste for "tableaux" that are "informed by sfumato and chiaroscuro." I like it when artists "deploy a panoply of effects" or "pull fresh stylistic arrows from their quiver," especially as they "play visual études on pungent thematic leitmotifs." Art should "transport us to an emotional apogee or nadir," don't you agree? Don't you adore the "implacable aristocratic mien" of John Singer Sargent's "Madame X," even if she was "an incorrigible demimondaine"?

I think great art "distills" a "quintessence" through an "admixture" of "rapier wit" "commingled" with "unapologetic polemicism." I dig art that "aerates," "effervesces," "finesses," "glamorizes," and "mesmerizes" along the "broad trajectory" of the artist's "evolution or devolution," offering "harrowing" depictions of our "zeitgeist" via "kinetic" lines that "jut akimbo in jaunty rhythms willy-nilly." And boy, do I get a kick when artists "counterpose divergent worldviews," "riffing" on topics that "defang cultural hegemony through commodity critique and Jencksian double-coding." If a painting is "awash in immaculate hues of bone and sand," shouldn't it also "counterbalance" these with a palette "bracingly astringent" and a technique that's nothing short of "virtuosic"? If you like Pop art, make sure it does plenty of "wink-wink/nudge-nudge." In portraiture and landscape, I gravitate toward "depictions" that are "rapturous," "transcendent," or "voluptuous to the point of louche," unless you're drawn to the "spartan planes" of "high-minimalist élan." And for God's sake, you've got to hand it to "rectilinearity," if only because it takes seven syllables to say "right angles."

But hey, none of that is artspeak, right?