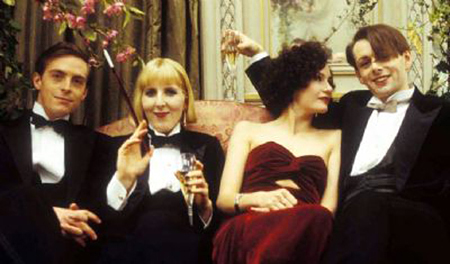 Still from the film "Bright Young Things," 2003, written and directed by Stephen Fry, based on Evelyn Waugh's novel "Vile Bodies."

Continuing my search for novels that will be of interest to artists as well as general readers, two 20th-century novels are perfect for anyone under 30 living in big cities — or who remember being under 30 and moving to a Big City.

“Vile Bodies” (1930) by Evelyn Waugh is all about twenty-somethings living in post-World War I London. Their siblings or fathers were killed in the war and, leaving them plenty of money, they rove from one party to another ending up entertained, but unhappier than ever. This is one of the greatest comic novels ever written in English.

“The Golden Spur” (1962) by Dawn Powell, a forgotten author championed by Gore Vidal, takes place in Greenwich Village for the most part, with forays uptown and a fateful weekend in Connecticut. It, like “Vile Bodies,” is about a twentysomething, this one from rural Ohio (like author Powell), who is searching for the father he never knew but who learns about his late mother’s many “famous” suitors left behind after her youthful heyday in the Village. Once in New York, he not only finds his father, but his fortune and love as well.

Waugh’s first marriage fell apart midway through writing “Vile Bodies,” hence its drastic change of tone half-way through the plot. Before that, we are witness to Adam Fenwick-Symes’ comic travails, trying to publish a novel (like Waugh) so he can afford to marry his wealthy girlfriend, Nina Blount. The plot moves swiftly and is, according to Waugh, the first novel to use telephone conversations extensively, as well as the first one concentrating on the film industry and a dangerous car race that leads to one of the characters going insane after she is inadvertently commandeered as a replacement driver. Everything and everybody are ridiculed, satirized or parodied, giving Waugh the chance to get back at the fast set of “Bright Young Things” (title of the 2003 film based on the novel), one of whom says to the novelist hero, “No one thinks the worse of you, respects you for it, I mean — earning a living and all that.” Returning from Paris, Adam’s novel is seized at Dover as obscene, and so his plans to marry Nina are shattered — for the first time.

In between, this very funny novel describes sex as “jolly pally” and “tennis and gymkhana and all that.” Adam’s rival, Ginger, admits he masturbated to a photo of Nina “above my bed the whole time I was in India.” He therefore asserts he has a right to marry her rather than Adam. Many of Waugh’s characters were based on real people with the names changed. So Lady Cunard, famous hostess, becomes Lady Metroland (a hostess who is also a white-slaver), joined by General Strapper (with a whip); Mrs. Blouse; the aristocratic Mrs. Panrast (mistaken as transvestite); Miles Malpractice (a gossip columnist whose homosexuality leads to his deportation); Mrs. Blackwater; Mr. Outrage (the Prime Minister); and, among many others, Lord Monomark (based on Lord Beaverbrook, the tabloid press magnate of the day). Thanks to all their shenanigans, breaking into 10 Downing St. for an after-party with the Prime Minister’s daughter leads to the fall of the government. By the end of the book, Adam’s fortunes have risen and fallen several times. Full of sparkling dialogue that has not dated, “Vile Bodies” is a good example of how understated humor can last longer as literature than as farce or slapstick.

Set after World War II in New York, “The Golden Spur” is a legendary bar downtown, like the Cedar Tavern or White Horse Inn, whereas the bartender tells Jonathan Jaimison, Jr., the hero: “Everybody used to come to the Spur ... until they could afford not to.” Taking off on the rage for Abstract Expressionism, Jonathan encounters people at the bar who tell him, “Painters have got to drink, especially these days ... A painter can’t turn out the stuff they have to do now without being loaded.” Soon Jonathan meets Hugow, a celebrated young painter loosely based on Jackson Pollock, complete with a Peggy Guggenheim-type dealer, Cassie Bender. They and the other characters he meets are helping him find his father (they all knew his mother in her 20s), leading him to all her old friends and lovers — some failures, some substantial successes. Is Hugow Jonathan’s father? Or is it George Terrence, a married attorney who later re-encounters Roger, his gay lover from the Village days? Or Alvine Harshawe, a macho thrice-married novelist and playwright, possibly based on Norman Mailer? Or could it be Dr. Walter Kellsey, an art historian at New York University? They all loved Connie, Jonathan’s late mother, now that they remember the mousy little typist she was at the time.

Readers can play guessing games, but, more fun, they can interweave the characters and places young people go in the story with real places mentioned that no longer exist, such as Luchow’s Restaurant and the old San Remo Café, interspersed with imaginary places such as the coffee house where Jonathan works, the Then-and-Now Café, or the Gilded Lantern. Similarly, the lovable but shifty characters experience much of 1950s New York. George is Dr. Jasper’s first psychiatric patient. Other real-life Village regulars of yesteryear, such as Stephen Crane, O. Henry and collector Mabel Dodge, are hilariously name-dropped.

Jonathan’s search is an authorial ruse for revealing these zanies, all of whom dismiss him at first, and then, when they think he has inherited a fortune, embrace him. Instead of returning to Ohio when his adoptive parents show up in New York with news of his biological father, Jonathan talks Mr. and Mrs. Jaimison, Sr. into backing Cassie Bender. With his new inheritance, he becomes her partner/art dealer. One character promptly chastises him, “You can’t downgrade Hugow’s painting. Everyone says he’s the best this year.” As the novel closes, Jonathan’s girlfriend, Amy, complains to him, “Parents are getting into everything now, spoiling all the fun.” Indeed.