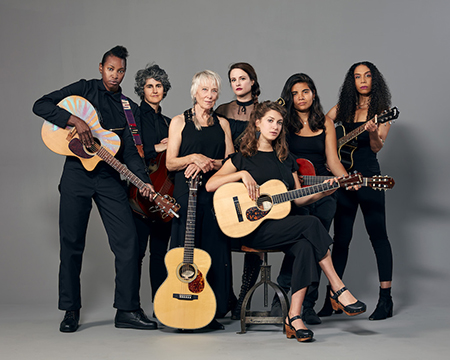 Sometimes, a work of art simultaneously channels and responds to the zeitgeist of the present moment — even when not originally intended to do so. Ragnar Kjartansson's recent durational performance "Romantic Songs of the Patriarchy" offered its visitors a chance to step away from post-election wrangling, cataclysmic fires and international humanitarian disasters for a brief musical respite. Its content reflected the current #metoo and #time'sup movements, despite the fact that the piece was originally conceived of before Harvey Weinstein's abusive behavior became public last October, triggering an ongoing tsunami of revelations and reactions.

For long hours on three days, a many-cultural and multi-generational group of thirty women each sang a popular hit, from a roster by (mostly) male artists, accompanying themselves on acoustic guitar. The casual misogyny of familiar lyrics was startlingly clear when delivered by a beautiful solo female voice. Songs ranged from the Police's "I'll Be Watching You" to the Rolling Stone's "Under my Thumb;" from Lil Wayne 's assertion that "My bitches love me" to the Crystals' "He hit me … and I knew he loved me." Scattered over the four floors of the Women's Building in San Francisco's Mission District, the performers sang their songs, over and over, in conference rooms, offices, closets and stairwells. Often, it was possible to hear four or five voices at the same time, an experience that was both exhilarating and disturbing.

Months before #metoo began, in the spring of 2017, Kjartansson was commissioned by San Francisco philanthropist Carla Emil to create the inaugural work for her new foundation, C Project. Its mission is to bring extraordinary performance-based art to unusual venues around San Francisco — like the events that take place at New York's Park Avenue Armory. Emil's project builds on a history of this kind of art in San Francisco. In the '80s and '90s, groups like Antenna Theater, Contraband and Survival Research presented in places that included an abandoned gas station, a freeway underpass and the crumbling foundations of a burned-down hotel. Due to forces both economic and cultural, however, it has been some time since such works have been seen here.

Kjartansson looked at a number of possible sites, but was immediately drawn to the Women's Building — both for its mission of providing legal, health and social services to the women in the community and its extraordinary murals, inside and out. He imagined musicians enlivening the space, and the project began to take shape. Once it was announced, anticipation was intense, and (free) tickets were quickly snatched up. Previous local exposure to Kjartansson's work led to high expectations; "The Visitors" (2012), an immersive video installation, was shown at SFMOMA last winter, and the McEvoy Foundation presented the nine-screen "Scenes from Western Civilization" (2015) over the summer.

With such anticipation, it would be difficult for the project to have satisfied all of its visitors. Some, hoping for the visual lushness of Kjartansson's video pieces, seemed baffled by the deceptive simplicity of their encounters with the singers. On the opening night museum directors, gallerists, collectors, artists and critics were all in attendance. Members of the Womens' Building community came as well, since that was also one of C Project's aspirations: to bring art to those who don't normally go to such events.

Though their names were listed on a wall label, encounters with the performers were anonymous and oddly impersonal. It was clear that they were actors as much as they were musicians, playing a role, over and over. Interestingly, this made them seem more powerful, not less — though the audience, able to walk away when they chose to, had power as well. (One of the performers told me in an email that, though she valued the experience, she would not say yes to doing it again, as having to sing the same song for three hours began to feel as though a man had yet again figured out a way to imprison and torture a woman.)

Kjartansson is a feminist — defined by the artist as "someone who believes gender equality has not been reached and wants to do something about it." His work, as the genuinely funny title of his piece indicates, often employs an ironic humor to achieve its goals. Still, in part because of all that has happened over the last year — the accusations, the responses, the suppression of women's right to choose proliferating in state after state — the laughter that might be a possible response to that irony wasn't much in evidence. More than once, I saw someone wipe away a tear while listening to the words of a song. But that wasn't a bad thing. It was the art we wanted and needed: its irony as sharp as it was beautiful. Whether or not it was the art we deserved, only time will tell.