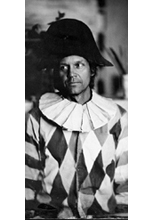 For Whiting Tennis, reading Abraham Lincoln's biography in the late 1980s triggered an ongoing interest in American history, and the Northwest-based artist has since made a career out of giving visual form to would-be artifacts, near-forgotten wars, and abandoned objects. At first glance, the work of Tennis might seem like a study in indecision. He's made use of every imaginable medium from plywood, concrete, and cardboard to ceramic, collage and oil paint. But at the heart of his process runs a taut thread by which the artist conveys notions of history, geography and the inherent temporality of works of art.

In 1991 Tennis' exhibition at William Traver Gallery was based on the Civil War. Following it, he began working backwards through time, creating two- and three-dimensional works that referenced American history, such as the Indian Wars, William Wood's New England's Prospect of 1634, and Jamestown. For his show on the Jamestown dig, Tennis conducted research at the John Carter Brown Library in Providence, Rhode Island--boasting one of the largest collections of maps and books related to the New World. The resulting exhibition, "1999," which showed in New York, Portland, and in Seattle at Grover Thurston, included among other things, images of corn (a staple provided by Native Americans), as well as figurative works in clay. Tennis wasn't content to simply suggest historical processes; he exposed his sculptural work to the elements. Tennis buried his clay forms in his yard only to later unearth and exhibit them with vestiges of dirt still intact. "I was making fake artifacts," he explains.

Bovine, a 14-foot long anthropomorphic sculpture, was inspired by an abandoned piggyback camper glimpsed on a humble plot of land in Twisp, Washington. Tennis exhibited his mammoth plywood structure at Greg Kucera before seeing it moved to the gallery's exterior balcony where it suffered the Northwest's wind and rains, in time taking on a decidedly more rugged appearance. Tennis deemed Bovine's weathering a necessary component of the piece, which eventually entered the permanent collection of the Seattle Art Museum.

For "Walleyed," his latest show at Greg Kucera, Tennis exhibited sculptural work in media that ranged from cardboard, plywood, and concrete, to paintings in acrylic and collage, most of which surrounded a standing sculpture of white painted plywood. Standing ten feet tall and featuring faceted sides, Triclops recalls early fifties Cubism. Bullet-like and vaguely vaginal, it looked as if it could take flight. "It's kind of like a monster," says Tennis. "It needed to be monster size."

Tennis hopes that Triclops finds a permanent resting place outdoors, where in time the plywood structure will shed its paint, "just like an old house." Institutions typically frown upon the works in their collection aging. Restoration helps to maintain the illusion of a state of perpetual youth. Tennis, however, embraces the ravages of time, and his use of atmospheric conditions recalls Honest Abe's approach to fact. As Tennis explains, of Triclops: "I could have used old wood to begin with, but that would have been misleading. When it gets old it will look old."