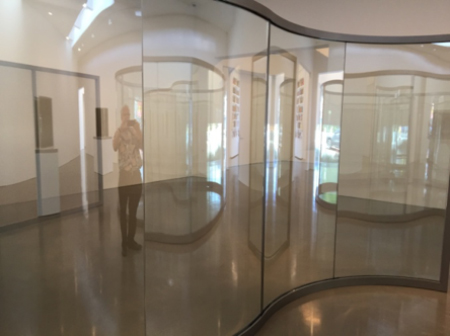 What are the best conditions for engaging with immersive or experiential art? With the current surge in exhibitions in these genres and museums drawing massive crowds to see them, is it possible still to have a one-on-one encounter with art that is intended to heighten consciousness or encourage serious reflection on some relevant issue? Or, as Rob Horning suggests in his recent article on museums turning into entertainment centers, are we so easily distracted by our cell phones and caught up in the mechanics of social media that we compromise the potential for a meaningful or enlightening experience?

As I argued in a previous column, I do believe that, in spite of their popularity and the fact that they are well attended, Yayoi Kusama's "Infinity Rooms" can successfully induce heightened mindfulness and feelings of transcendence. To the museum's credit, The Broad encouraged visitors to Kusama's recent retrospective to forego the selfie by requiring phones to be placed in receptacles located at the entrance to each "Infinity Room," and by limiting one's encounter to only thirty seconds. Even without such an assist, Kusama's "Infinity Rooms" are conducive to concentrated perceptual awareness, because they are intended to be experienced one at a time in a contained space the size of a closet.

Perhaps in most instances, the potential for a truly significant encounter with an experiential artwork depends upon whether one engages with it as part of a crowd or individually. James Turrell's incandescent light installation "Pleiades," exhibited several years ago at Pittsburgh's Mattress Factory, places the viewer in a darkened room. After about fifteen minutes an image begins to emerge. The situation — placing oneself in a dark, quiet space — facilitated feelings of tranquility, followed by a sense of awe and exhilaration as an amorphous orb of light gradually came into view.

By contrast, observing one of Turrell's characteristic "Skyspaces" in his current exhibition at Kayne Griffin Corcoran was a bit of a disappointment (the rest of the exhibition is exemplary). Typically, a Turrell skyspace is a small room with an oculus cut into the ceiling such that the sky becomes a focal point for meditative contemplation. To alter our perceptions of the sky, the oculus is surrounded by changing colored lights. To focus our attention specially designed seating is provided. In Turrell's "The Color Inside" Skyspace installation at the University of Texas, Austin, for example, benches affixed to slanted walls place the viewer in an optimal seating position for gazing upward. Regrettably, due to the party atmosphere of the Kayne Griffin Corcoran event, and the fact that the setting for the skyspace is a conference room with everyday furniture, it was logistically impossible to immerse oneself in the work. And, yes, everyone was taking pictures with their phones. So, the lesson here may be that immersive art, especially that which is designed to affect perception, succeeds best when encountered under specific conditions that optimize a viewer's experience.

A truly splendid convergence of such advantageous circumstances was found in Dan Graham's current exhibition at Regen Projects. Two of Graham's characteristic "pavilion" sculptures, room-size hybrids of monolithic sculpture and architecture made from two-way mirror resin, exert a magnetic pull. "Nearly Ovoid," as the title indicates, is an elliptical structure with an open entryway, such that one can walk inside as well as around the entire sculpture. Positioned opposite this work is S-curve-triangle, a curvilinear structure that is completely open, hence it has no interior space.

What was especially unusual about these two works is that they seemed to call out to be photographed, while simultaneously encouraging us to keep moving about the space. This was an instance in which the use of the cell phone enhances rather than diminishes our relationship with the artwork. In the typical selfie, the artwork usually functions as a backdrop and the visitor is the subject. In contrast to this photographing "Nearly Ovoid" produces "inadvertent selfies," where one's image is subordinate to the art and functions simply as one of many compositional elements. Others include swirling patterns formed by interactions of sculptural contours, light, mirrored reflections, and time-based sections of the real world, such as moving cars observable through gallery doors and windows. In short, the optimal viewing of these two works involves moving between and around them and observing the resultant interactions of a number of factors.

While standing in a Kusama "Infinity Room" makes us feel as though we are at the center of the cosmos, we remain cognizant that her observed universe is completely illusory. Graham's installation, on the other hand, encourages bodily movement through the exhibition space that produces a complex mixture of reality and illusion, ultimately evoking an awareness of those liminal regions between materiality and immateriality, where consciousness seems to be transitory and in flux.