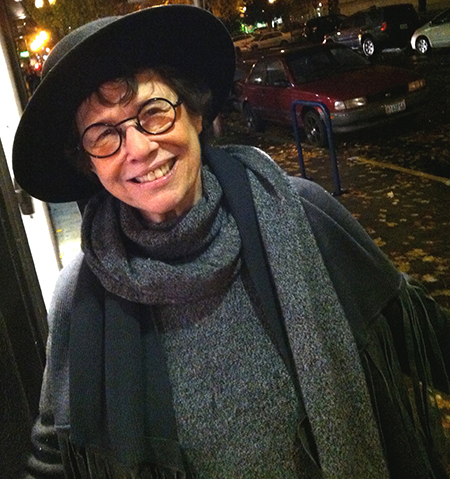 In late February, the arts community in the Pacific Northwest lost an indelible voice when poet, playwright, artist, and collector Sandra Stone died at 83. She hadn't been seen on the Portland "First Thursday" art rounds for several seasons due to mobility issues, but in her final years, to the extent her health allowed, she brought the art scene to her, holding intimate soirées in her Pearl District loft. She was arguably best known for her poems about artists, writers, and the creative life. In 1998 she won the Oregon Book Award for her deliciously titled anthology, "Cocktails with Brueghel at the Museum Café." In one of that book's 57 poems, she contemplated the cow pelvises that recurred in the works of Georgia O'Keeffe: "If you come on a bone in its natural state, naturally/paint it. Erotica lives in voluptuous principle: in a marvel interred/in the house of itself,/or abandoned where it immensely resides/in its personal desert." It takes sensitivity and chutzpah to unearth fresh insight in the austere sensuality of these well-known paintings. Stone rose to the challenge.

When she passed away, she had just completed the manuscript of a forthcoming book that is a follow-up of sorts to "Cocktails..." It's entitled "The Plight of Proust's Throat, or Why Bergotte Died." Stone inhabits the first-person voices of historical artists such as John Singer Sargent, Chaïm Soutine and Isamu Noguchi, assuming their personal and stylistic idiosyncracies. Of Constantin Brancusi's wooden sculptures she wrote: "Some mocked them as merely/stumps./Pah. How little people know/of the inner life of/inanimate things./Who's to say what speaks from the grave."

In her life, as in her writing, Stone was an aesthete. Her living space was hung with works by her artist friends, among them iconic Northwest figures Sally Haley, Mel Katz, Henk Pander, Gregory Grenon and Abi Spring. It seemed as if she knew everyone in town (longtime Portland Art Museum chief curator Bruce Guenther was a friend, as were Pink Martini bandleader Thomas Lauderdale, playwright Steffen Silvis, and a constellation of Portland's literati). She relished the role of raconteur, spinning tangential stories suffused with her love of the arts. As a thinker she adopted an absurdist's take on the tragicomedy of existence, which she distilled in the mixed-media assemblages she created, often deploying the motif of the raked stage. This was her metaphor for the unstable ground we tread in life and the ludicrous ways we adapt to our skewed perspectives.

Her writing alternated between intricate, esoteric wordplay, subtle observation, bombast, gently risqué humor, and above all an acute awareness of life's brevity. As one character beseeches audience members in the closing monologue of her chamber opera, "POof": "Love, darlings, for those are bones, lucky beside you. Or up on the knoll." For Stone, life itself was a memento mori. Like many artists and writers, she was vexed by dividing time between the act of creation and the necessity of self-promotion. She was always counting the sands remaining in the hourglass, wondering whether she had done enough, soon enough, to secure her legacy. Sometimes, despite the breadth of her interests and intellect, she rued that the wanderlust within her had never wandered nor lusted quite enough. It was she who introduced me to James Wright's haunting poem, "Lying in a Hammock at William Duffy's Farm in Pine Island, Minnesota", which concludes simply and chillingly: "I have wasted my life."

Few things could be further from the case for Stone, as the outpouring of fond remembrances on her social-media tribute page have attested in the weeks following her death. Still, she was human enough to voice the fears of irrelevancy and obsolescence we all share, artists perhaps more than most. Though Sandra Stone was her pen name, most friends knew her as Sunny Peters, an apt moniker given the sunny smile she would flash in delighted bursts of bonhomie and insight. That smile did not mask or even defy her knowledge of the end that awaits us; it accepted and encompassed it. As she admonished — an aesthete to the end — in the opening monologue of her final book: "Onward. We are the many who love beauty, the many, impassioned dead. Bonne chance all you carousers."