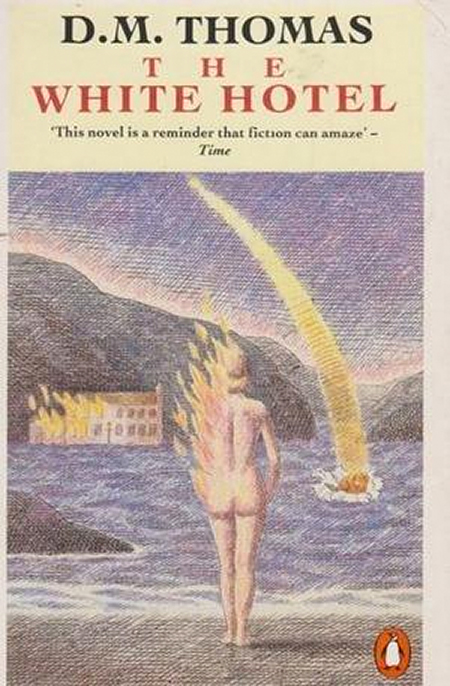 Cover of "The White Hotel" by D.M. Thomas

Continuing my search for novels of interest to visual artists, two with heroines who are an opera singer and an actress respectively epitomize radically different approaches to a familiar theme of self reinvention in alien societies. "The Dud Avocado" (1958) by Elaine Dundy and "The White Hotel" (1981) by D. M. Thomas are narrated by their heroines, but alternate with other characters' points of view. Both novels were heralded when they first appeared, and have remained in print ever since.

Rave reviews in newspapers and prestigious literary journals are one thing, but mid-century modern celebrities fell all over themselves praising Elaine Dundy's autobiographical fiction, prompting no less than Groucho Marx to write, "If this was actually your life, I don't know how the hell you got through it." On top of such praise (understandable since Groucho is alluded to in the story), Ernest Hemingway gushed to Dundy that "I like the way your characters all speak differently… My characters all sound the same because I never listen." Dundy was 37.

Who is Dundy's Sally Jay Gorce? Contemporaneous with Holden Caulfield, J. D. Salinger's hero in "Catcher in the Rye" (1951),Sally is Dundy's answer to Holden on one level—another smart, alienated, New York kid—but so much more. Her antics date back to Defoe's Moll Flanders (her American boyfriend turns out to be a pimp and possibly a murderer); Isabel Archer of "Portrait of a Lady" by Henry James (she is duped and swindled by a couple who seem to be her closest friends); and most memorably, Holly Golightly, Truman Capote's legendary heroine of "Breakfast at Tiffany's," published the same year and, in fact, overshadowed by "The Dud Avocado." Dundy's novel is longer and more deeply plotted than Capote's. Her title comes from a remark made by Max, a crazy Hungarian photographer (whom Sally ends up marrying), when he mishears a comment she makes after he describes the "typical American girl" as being like the "new" fruit, the avocado, "A hard center with the tender meat all wrapped up in a shiny casing." When Max suggests Sally is the avocado for him, she pouts, "What you've got here is a dead one," which he hears as "dud." It's typical of the multi-lingual puns and comically disastrous misunderstandings that thread throughout the story.

Lovable because she starts out so clueless, we witness her picaresque progress unfold, as Sally becomes a self-aware 22-year-old, first in Paris, then in Biarritz and New York City. Sally's self-deprecating manner is also unapologetic: she is rich, thanks to her parents and gay Uncle Roger (who fronts her in Paris for two years), and very self-conscious among the theatrical circles of Americans she darts in and out of in 1950s Paris.

The novel is divided in half with Paris as the opening setting for every imaginable caper unfolding from St. Germain-des-Prés to Montmartre and Montparnasse. Everyone except Sally has their own car, money to burn, and aspirations of confident talent and genius, yet in the second half of the story in Biarritz on a film set, she grows up as she exhausts herself in liquor and partying (Patricia Highsmith's 1955 "The Talented Mr. Ripley," with its shifty, idle American expatriates in Venice comes to mind here). Period references abound including a dinner party that is compared to Sartre's "No Exit," with its line, "Hell is other people." Nothing passes by Sally Jay without a laugh or a sneer, all a result of her growing up emotionally and sexually before our eyes. Her sophistication turns out be a mask for acute vulnerability, not that different from Huckleberry Finn, the ultimate American youngster.

Lisa Erdman-Berenstein, the heroine of "The White Hotel" may be based on Sabina Spielrein, a patient of Sigmund Freud's who perished in the Holocaust. Thomas' Lisa has second sight, which the reader only learns about half-way through the novel. The story consists of letters, diaries, Freud's purported case studies, and a narrative voice that goes back and forth between Lisa, Freud, and an omniscient narrator; once the story begins, it is hard to put the book down. Lisa's hallucinatory visions in her dream, which she transcribes for Freud, tell the tale of an outrageous erotic weekend in "the white hotel," at which the most extraordinary and implausible events occur.

What is the white hotel? And why does her dream end in a fire at the hotel? Read as an allegory of the coming catastrophe for the Jews of Vienna, "The White Hotel" alternates between shimmering descriptions of star showers, the northern lights, and violent sex scenes recalled by Lisa to Freud. In reality, Spielrein was a patient of Carl Jung's as well as of Freud's and had an affair with Jung, depicted in the 2011 film, "A Dangerous Method."

Lisa's character is a middle-aged opera singer making a comeback at La Scala who meets a young man on a train and embarks on a brief but intense weekend affair with him. Freud's letters and comments to her—all imaginary, of course—respond dryly to her fantasies of every imaginable sexual indignity. Only as the novel proceeds to its horrible denouement does the reader understand that such a dream was more prescient than she could ever have wished. Reunited in Kiev with her Ukrainian opera singer husband, Lisa is trapped with her stepson as the Nazis invade. As the reader slowly realizes her fate, the horrific tale of mass murder at Babi Yar unfolds from her viewpoint in harrowing yet beautifully written detail. This is a novel that could be read a second time—but backwards, beginning with the final chapter and followed by the next-to-last, etc. Every riddle and puzzle is unraveled, not always apparent and mystifying upon first reading. Like "The Dud Avocado," "The White Hotel" bears re-reading any number of times, both for entertainment and for the satisfaction of ingenious storytelling.