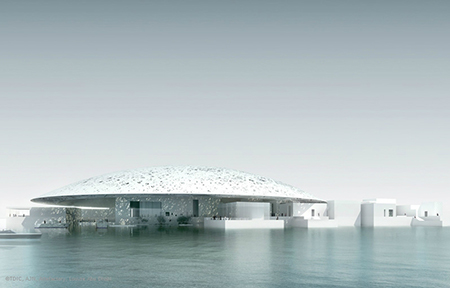 Many aspects of the new Louvre Abu Dhabi intrigue me. Jean Nouvel's design is extraordinary: simultaneously ancient in inspiration and space-age, low-slung and soaring. It's an inviting oasis of flowing water and rectilinear planes that make it inviting to traverse. The dome that is the project's visual signature invites dappled light inside much the same way that the "veil" of Los Angeles' Broad Museum's diffuses its interior in a softly ambient glow, coating artworks in a honey-bath of perfected light. Along with I.M. Pei's Museum of Islamic Art in Doha, Qatar, the new Louvre is near the top of my list of museums to visit.

I'm also struck by Louvre Abu Dhabi's curatorial schema, which departs from the chronological layout central to most museums in the West in favor of a thematic layout. Instead of being led from century to century in a linear progression, viewers are invited to experience parallels between visual motifs across the gamut of civilizations. In galleries designated as "Cosmography," viewers witness the invention with which disparate societies have conceptualized the origins of humankind and the mysteries that lie beyond the stars. In "The Magnificence of the Court," treasures of ancient Africa commingle with ceremonial vestments from the European Middle Ages and the extravagances of the Baroque. "The New Art of Living" invokes the rise of the bourgeoisie as a global phenomenon, positing mercantile portraiture in Flanders as commensurate with depictions of everyday life among the upwardly mobile in Edo-era Japan.

Applying tenets of cross-disciplinary studies and comparative religion to museum curation, this approach structures viewers' experience as a tour through cultural traditions and iconography as seen via a prism of closely related core archetypes. In her 1990 bestseller, "Sexual Personae," feminist provocateur Camille Paglia romped through art, literature and sex, positioning all of these realms as expressions of recurring archetypes. In Paglia's worldview, the ancient Egyptian sculptor Thutmose's iconic bust of Queen Nefertiti (circa 1350 B.C.) is an early avatar of the Femme Fatale persona; and the Etruscan and Greek kouros follow the Beautiful Boy into Renaissance iterations of Michelangelo's and Donatello's David. This sassier, stiletto-heeled updating of Joseph Campbell's The Hero with a Thousand Faces underlines our fondness as a species for retelling the same stories over millennia, dressing up a recurring cast of characters with new costumes. Or, as Jim Morrison intones in The Doors' classic "The End": "He took a face from the ancient gallery, and he walked on down the hall."

In Lois Farfel Stark's new book, "The Telling Image: Shapes of Changing Times", the author guides readers through the history of art and architecture with a related thesis: that human beings across time and geography have returned to elemental shapes to weave creation myths and moral parables. Web forms appear in Australian Aboriginal cave paintings, Druidic standing stones, and teepee settlements of Native Americans. Ladder forms appear in Sumerian and Assyrian tablets. Helixes, embedded in our DNA, lend themselves to Indian mandalas and modern architectural marvels such as Frank Lloyd Wright's Guggenheim Museum in New York and Frank Gehry's Disney Concert Hall in Los Angeles. We are deploying universal visual syntaxes to spin universal narratives.

This is the crux of Louvre Abu Dhabi's layout. Holland Cotter, writing in the New York Times, finds the approach novel, if somewhat problematic. I would agree, but only to a point. Yes, a quasi-Jungian "We Are the World" approach to art history can gloss over thorny matters of cultural and religious difference that are far from incidental. Pointing the bedazzled viewer from a prehistoric fertility totem directly to a Byzantine icon of the Virgin Mary may feel like a hyperspace epiphany on the construct of motherhood, but what is lost in the skipping-over of eons? I get that. But a museum above all is an album of images, not words. Books, lectures, roundtables, conversations — the means by which we used to educate ourselves in the intricacies of context back when we had attention spans — are where we turn to discern, to parse, to debate questions of values. Museums function better as vehicles toward experience, immersion, the bliss of unfiltered perception: the fundaments that marinate in the mind's eye and compound over time into principles and belief systems. To separate images from chronology and hierarchy, as Louvre Abu Dhabi has done — to illustrate the trajectory of aesthetics as oceanic rather than discrete, diffuse rather than linear — is a controversial and destabilizing tactic. In my opinion, it's also a brilliant one in an era when the almighty image reigns supreme.