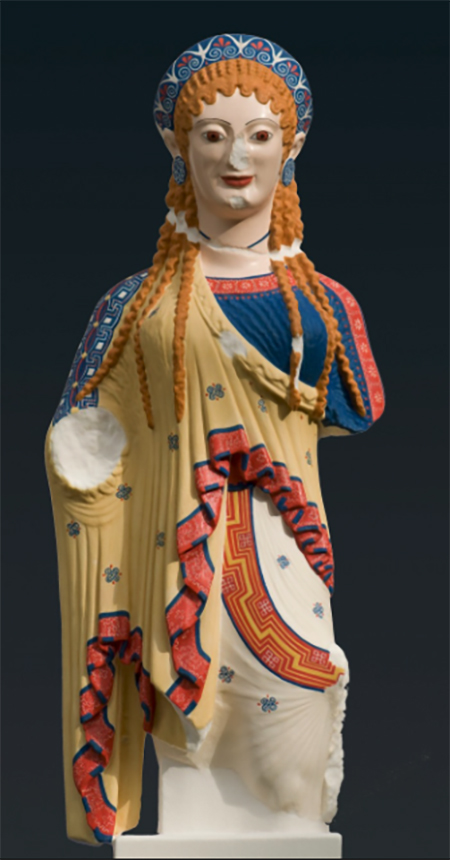 Reconstruction of the so-called Chios kore from the Akropolis in Athens, 2012. Copy of the original: Athens, ca. 500 BC. Crystalline acrylic glass, with applied pigments in tempera. Liebieghaus Skulpturensammlung, Polychromy Research Project, Frankfurt am

“But not yet have we solved the incantation of this whiteness, and learned why it appeals with such power to the soul. .,, Is it that by its indefiniteness it shadows forth the heartless voids and immensities of the universe, and thus stabs us from behind with the thought of annihilation, when beholding the white depths of the milky way? Or is it, that as in essence whiteness is not so much a color as the visible absence of color, and at the same time the concrete of all colors; is it for these reasons that there is such a dumb blankness, full of meaning, in a wide landscape of snows — a colorless, all-color of atheism from which we shrink? And when we consider that other theory of the natural philosophers, that all other earthly hues — every stately or lovely emblazoning — the sweet tinges of sunset skies and woods; yea, and the gilded velvets of butterflies, and the butterfly cheeks of young girls; all these are but subtle deceits, not actually inherent in substances …”
— Herman Melville, Moby-Dick, Chapter XLII, ‘The Whiteness of the Whale”

After my recent dissatisfaction with the new, hip programming at San Francisco’s Legion of Honor — which, in my opinion, trashed the institution’s own collection of Rodins, not to mention the tragic humanist tradition of western art — it is a pleasure to see the balance between old and new restored. A pairing of Rodin sculptures with contemporaneous paintings by Gustav Klimt sheds light on the erotic dimension of these two late nineteenth-century greats; and the exhibition “Gods in Color: Polychromy in the Ancient World" presents a strong, if long standing case that the Greco-Roman tradition that we have come to associated with pure, if blanched idealized form, wrought with dazzling skill in Pentelic marble from quarries north of Athens, is a cultural myth. I’ll focus on the latter in this column.

The statues that we grew up regarding as pure, visually chaste (even when depicting the sexual harassments of Zeus/Jupiter), and (to cite Nietzsche) Apollonian, rational, intellectual and enlightened, as opposed to Dionysian, emotional and ecstatic to the point of violence, were painted, apparently rather gaudily. On my first visit, somewhat appalled by the busy patterning and bright colors, I was reminded of Marlene Dietrich’s comment at the premiere of Jean Cocteau’s film, "La Belle et la Bête," on seeing the tortured, mysterious Beast magically transformed into the pretty, perfumed prince (both played by the painfully handsome Jean Marais): “But give me back my poor Beast!” Even if historically inaccurate, I found myself missing the clarity of pure marble. On my second visit, I looked at the scientific and historical evidence and found it convincing, even if some of the restorations still seemed overly assertive in a way that the brightened colors of the cleaned Sistine Chapel frescos never were, a generation ago, after the removal of five centuries of candle smoke and soot.

The exhibit’s core works are painted reproductions of works held by the sculpture collection, Liebieghaus Skulpturensammlung in Frankfurt and other institutions, produced by Vinzenz Brinkmann and Ulrike Koch-Brinkmann using up-to-date technology, including ultraviolet scanning (for more info go to http://buntegoetter.liebieghaus.de/en). When classical sculptures were excavated during the Renaissance, they were denuded by time and erosion of the paint they once wore, with the faint traces of pigment either nearly invisible, or, after neoclassical theorists had exalted their shining purity of form, scrubbed white. The exhibition makes clear that Johann Joachim Wincklemann (1717-1768), whose "History of Art in Antiquity" (1764) was to prove so foundational, acknowledged that classical statuary was indeed polychromed. Nevertheless, his championing of idealized classical form — which may owe something to his homosexuality — carried the day, perhaps answering to a cultural counter-reaction to the frivolity of the fading Rococo style.

Even the best and brightest can be wrong, of course. A group of painted figures, laid out in Rosekrans Court, beneath the Legion’s pyramidal skylight, reconstructs sculptures made for the Doric Aphaia Temple, built on the island of Aegina, east of mainland Greece, about 480 BC, and excavated in the first decade of the nineteenth century. Aphaia was a mother goddess, and this particular temple was a favorite subject for artists of the time, including Turner. The figures that were made for the temple’s western pediment treated the Trojan war, so the supposition that the two kneeling archer figures represented, respectively, the Greek warrior Teucer, brother of Ajax, and the Trojan prince Paris, seems plausible, even if the flat egg-tempera painting and bright color, so reminiscent of dolls and plastic action figures, destroy any sense of Homer’s "strong force of fate." Teucer is dressed in a white tunic soberly decorated with blue bands and a horsehair-crested war helmet; while Paris, in multicolored diamond patterned tights, is as gaily turned out as a, well, bridegroom — or, as the didactic wall labels suggest, a decadently feminized Asiatic. A trio of warrior heads nearby provokes the same response from this viewer: the unpainted one, in synthetic marble, roughly carved, with eyes blank, has a poetic mystery that is entirely absent from the two finely carved, painted heads on adjoining pedestals, which look fanciful and slightly absurd to my 21st century eye. It is like 2D comic-book characters popped into 3D space, which has thoroughly different pictorial standards that of course have nothing to do with 5th century BC visual intentions.

The whiteness of marble, unpainted by time, lends a melancholy and even stoic dignity to the figures, which the painting, however skillfully done, removes. A case in point is how the Temple of Aphiaia figures are joined by other painted reconstructions, sometimes featuring gilding, metal or stone details, that share their visual impact: a pair of life-sized warriors, majestically martial, metallic, and nude but for helmets, shields and weapons, from the island of Riace; a mounted horseman from the Acropolis, wearlng leggings akin to Paris’; the Amazon princess Antiope holding the Greek hero/cad Theseus, the plaster cast painted only minimally; and a cast of a relief from the Parthenon, showing a boy and horseman, which through the magic of digital projection is alternately ‘painted’ and unpainted.

Accompanying the painted reconstructions are classical and neoclassical (Canova, Cellini, Maillol) sculptures from the Fine Arts Museums and other collections, including two wonderful casts from the University of California, Berkeley: a monumental a caryatid (woman-as-column) made from the original at the Acropolis, in Athens, and a fragmentary horse and rider from the Acropolis Museum. Watercolor paintings made onsite at the excavations in the early nineteenth century by the antiquarian Edward Dodwell and the artist Simone Pomardi with the help of a camera obscura further enrich our understanding of how and why art is made and lost, rediscovered, appropriated, interpreted, misinterpreted and reinterpreted. I have merely touched on a few aspects of this important and revelatory show. In our age of enraged thersitical (a word that deserves revival) partisanship and Dionysian excess, it’s also a call for scientific, historical, reality-based attention and analysis.

“My life and fortunes are a monstrosity, partly because of Hera, partly because of my beauty. If [only] I could shed my beauty and assume an uglier aspect the way you would wipe color off a statue.”
— Helen of Troy in Euripides’ play, Helen, 5th century BC