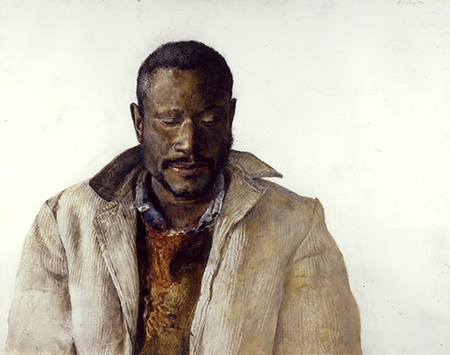 "Andrew Wyeth: In Retrospect," organized by the Seattle Art Museum in honor of the realist-regionalist artist's centennial, includes paintings that have mostly never been seen in Seattle before now. Interestingly, the Frye Art Museum, not the Seattle Art Museum, has the longer, more enduring relationship with the entire Wyeth family, having early on collected father (illustrator N. C. Wyeth), son, and grandson (Jamie Wyeth). SAM owns only one of the Pennsylvania/Maine resident's works, "Low Limb" (1956) which, curiously, is not on view.

Painted primarily in opaque tempera or watercolor, Wyeth's landscapes, portraits, interiors, and still lifes are ethereally delicate, worthy of scrutiny. Defying the certitudes of photography, Wyeth made the case in mid-century America that realist painting still had a role to play and, surprisingly, was admired by many of the avant-garde artists of the period, including Andy Warhol (who befriended his son Jamie). Warhol, also from Pennsylvania, must have admired the homely mundanity of many of Wyeth's subjects and their resistance to spectacular gesture or emotionally frantic mood. Wyeth is all about quiet anxiety; omen and symbol; hidden lives and repressed memories.

Wyeth's sitters, for example, his Swedish-, German- and African-American farmer neighbors, all had checkered pasts, as did the Wyeth family. Now, when we see the portraits of Mr. Kuerner ("The German," 1975) and Mrs. Kuerner ("Anna Kuerner," 1971), we can choose to either read in or ignore their isolation and conjugal estrangement. Similarly, in the portraits of black farmer neighbors, like "The Drifter" (1964), we sense a resentment directed towards the artist, who drew upon "friends" and locals to repeatedly sit for pictures. Willard Snowden, "The Drifter," and Thomas Clark, an older black man, were followed by black women who became professional nude models for the artist. In the extensive catalogue (240 pages with essays by ten scholars), writers chronicle the precise connection between African-Americans and Wyeth's studio practice. Wyeth brilliantly captures a sadness mixed with anger or defeat.

The Kuerners are joined by other neighbors, the Olsons, parents of the famed woman in "Christina's World" (1946) which the Museum of Modern Art, New York, would not lend. Instead we have softer, less exalted views of the woman, as in "Christina Olson" (1947), "Miss Olson" (1952) and "Anna Christina" (1967). The temptation is to get wrapped up in the concatenations of Wyeth's circle, forgetting that they are pretexts for re-conceiving traditional genres such as the portrait or landscape, not biographical vignettes. In Wyeth's hands, expected vistas are skewed or turned upside-down so as to re-orient our perception. Human figures are both emotionally and physically naked in some cases, with the subject turned away from the artist's (and viewer's) gaze. Among these, "James Loper" (1952) and "Nicholas" (1955) are some of the strongest, most affecting, paintings on view.

SAM curator Patricia Junker has done a yeoman's job selecting an extraordinary range of Wyeth's oeuvre, from pencil sketches, collages and studies (many in glass-topped display cases), to grand nature scenes from Maine, including "Winter Light" (1953), once owned by poet Robert Frost. For all their specific localities, the works make the transition to Seattle nicely, with its surrounding natural beauty. People appreciate how similar Maine can be to Washington State. Wyeth's obsessive return to favored scenes and areas transcends their regional origins and, ultimately, these locales act as synecdoches for the entire American landscape.

Similar to Frost's New England gloominess, Wyeth's pessimism is a bracing antidote to certain portraits or nudes that spill over into sentimentality or voyeurism, especially the series of underage girls, such as "The Sauna" (1968) and "The Virgin" (1969). Sober and restrained throughout, a thread of death permeates Wyeth's art, perhaps, as historians have argued, haunted by his father's death in a car accident (hit by a railroad train on the track) that may have been a suicide. "Black Velvet" (1972), "Spring" (1978) and "Adrift" (1982) use submerged, reclining figures to confuse sleep and death effectively.

Wyeth's own farewell paintings, "Wheel Gate" (2007) and "Goodbye" (2008) suggest new directions that the 91-year-old might have taken; they are more painterly, even rather sloppy and relaxed. The entire exhibition underscores Wyeth's unique American voice, its dark view of life, but with a fractured optimism and stern determination to carry on that we now associate with a vanished, perhaps more tolerant era.