An Antidote for Our Woes
Editors' Roundtable
Column by David S. Rubin 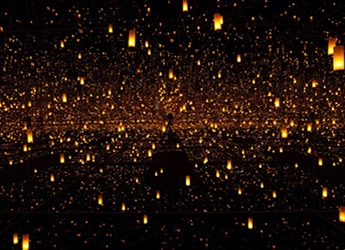 In case they missed it at the Hirshhorn, Donald Trump, his cabinet, the majority of Republicans in Congress, and all the haters who are generating the vicious disease that has overtaken our country should really pay a visit to The Broad in Los Angeles. On arrival they should be given a walkthrough of the current exhibition "Yayoi Kusama: Infinity Mirrors." Before entering, they should be presented with a simple overview of the work, explained to them from both scientific and spiritual perspectives. They should be informed that, using her imagination, Kusama has designed and implemented a number of interactive art installations that permit viewers to have experiences that encourage understanding of the invisible substructures that unite us, and connect us to all forms of nature, as well as to infinite space.

They should also be instructed to think about Kusama's structures as models for meditation rooms, where individuals can experience moments of heightened consciousness. Think about how it might affect an elected official's day if he or she spent just 30 seconds — the amount of time allowed visitors to spend in each Infinity Room — before heading off to work at the Capitol. Imagine if Kusama were to install an Infinity Room that our representatives and all visitors to the Capitol building passed through after going through security.

Kusama's Infinity Rooms are among the finest, and certainly most popular examples of the genre of interactive or immersive installation. Standing in Kusama's Infinity Rooms at The Broad, one can experience what it feels like to be at the core of infinity while seeing a latticework of lines moving in all directions. In some cases, technologically produced imagery seen expanded in mirrors can take on symbolic or metaphoric connotations. While standing in "Aftermath of Obliteration of Eternity" a matrix of flickering lights reminded me of candlelight vigils that filled the streets of America during the peak years of the AIDS crisis; fireflies in jars; and votive candles lining pathways or placed at altars.

In terms of art history, Kusama is by no means unique among artists who have visualized the infinite universe.  A year after Kusama made her first Infinity Room, Lucas Samaras created his "Room No. 2 (Mirrored Room)," now in the collection of the Albright-Knox Art Gallery. In speaking about the meaning of her sculptures, Claire Falkenstein often referred to "the never-ending screen." In reference to his late abstract paintings, Al Held talked about string theory and referred to a "non-gravitational, multi-directional space."

It should be noted, too, that artists much younger than the 88-year-old Kusama are today practicing the art of immersive installation, yielding a variety of thought provoking or emotion filled experiences for viewers. Two outstanding examples seen at the San Francisco Museum of Modern Art are by Rafael Lozano-Hemmer and Ragnar Kjartansson. In Lozano-Hemmer's "Frequency and Volume: Relational Architecture 9," visitors see their own shadows appearing at different scales on a wall as they move through the space. The shadows are detected by a computer tracking system that creates an ever changing sound composition of frequencies streaming from a host of sources (radio, cellular, air traffic control, etc.). A more conventional musical composition can be heard and seen performed in Kjartansson's "The Visitors," a darkened room filled with several freestanding video projections, each featuring a different musician performing the same composition, in unison, in a different room of the same house. Walking through the installation is akin to witnessing an orchestra from the perspective of an insect, while looking at staged narratives that can stimulate one's imagination. They have the dramatic flair of a Jeff Wall light box.

It is encouraging that the Kusama exhibition set attendance records at the Hirshhorn and that tickets sold out at The Broad in minutes, proving that contemporary art can indeed attract the same kind of attention that once only seemed possible for historical exhibitions such as the landmark "Treasures of Tutankhamen." At a moment that the world slides dangerously towards chaos, we can mend our wounds with art like Kusama's Infinity Rooms, because they remind us who we really are.