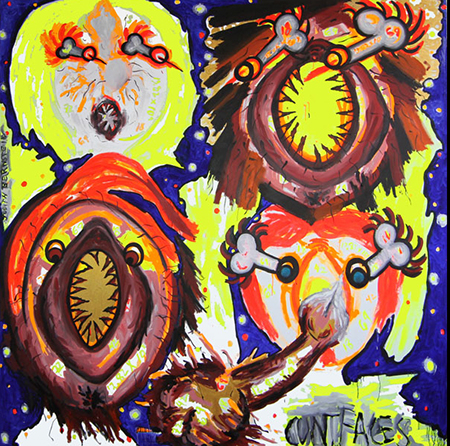 Summer exhibitions tend to be relative throwaways, but Venus Over Los Angeles’ “Cunt” trotted out a group of feminist artists whose aggressive representation of frank sexuality has proven serendipitously visionary. The stated point of this show was to “unabashedly portray the vagina as a locus of power.” The work presented is both recent and dated from the 1960s and 70s, establishing an important historical framework from which certain current events must be viewed (The youngest among the six artists was Marilyn Minter, now 69).

Judith Bernstein refreshingly busted the historical formulation, putting out new works, including a full-on black and white screw mural and a new batch of “CUNTFACE” paintings that flip the old trope of male fear of phallic dismemberment. Rather than functioning as a symbol of male anxiety, the former Guerrilla Girl brings in-your-face political rage together with sidesplitting visual humor that gets your emotions both coming and going.

When Emma Sulkowitz performed “Mattress Performance (Carry That Weight)” as a college senior throughout the 2014-15 school year, she was both responding to a campus rape experience that she reported, but which the local district attorney declined to pursue, and making public a trauma that women typically would hide from sight out of shame. It’s impact on the male student was to provoke the ironic accusation of bullying; so it should not be overlooked that truth-telling was an essential element of the visual rhetoric. In the context of the admittedly sophomoric concept (Sulkowitz’ sheer persistence elevated her concept significantly beyond a normal undergraduate student project) the honesty of her account in a classic “he said/she said” exchange implicitly determines the aesthetic integrity of “Mattress.” But in the larger historical context this simply does not matter. As an act of female agency it exposed the much deeper issue of a male-dominated power structure that remains very much in place. Any woman who has been subjected to the degradation of rape could not only identify but experience powerful emotions. The catalytic effect became a cultural bombshell.

The reverberations of the aesthetically driven feminism of these and many other female artists for more than a half-century reached a certain culmination point in just the last year, starting with the infamous Access Hollywood tape that should have yet failed to prevent the accession to the Presidency by a publicly known misogynist and psychopath. If this electoral act of public cynicism expressed an underlying hatred for the social progress of women on the part of a disturbingly major segment of American society, it also lead directly to the bedpost of serial sexual harasser Harvey Weinstein just last month following stories published in The New York Times and The New Yorker magazine.

The sheer eruption of stories of sexual harassment by thousands of women has flooded through both news and social media in the weeks since. A number of previously prominent careers have been abruptly ended in the immediate aftermath (including in the art world, Artforum publisher Knight Landesman), and it is likely that others will be washed right out of our cultural hair. If Sulkowitz’ performance played a key role in effecting the spread of campus anti-rape policies, the millennia-long expression of alpha male privilege of unchallenged sexual access is now in the process of rapid dismemberment thanks to the symmetry of publicly prominent conservative and liberal abusers.

That symmetry has further exposed the moral bankruptcy of American conservatism, which under the spell of a gangster administration seeks to exercise power as the means to subjugate all opposition (especially those within the conservative world who have clung to some measure of moral integrity). Thus they have generally rallied to the support of their wannabe dictator in exchange for such rewards as a hoped for tax cut and more federal judgeships.

I regard it as a point of pride that liberals quickly declared that Weinstein’s history of support for progressive causes could not insulate him from the consequences of exactly the same moral corruption. It suggests that American liberalism possesses the necessary antibodies to resist a cultural and political infection that may have infected one major party beyond repair and placed America’s democratic tradition in existential danger. This moral integrity is far more than a talking point, it is the very rallying point around which we will rescue the culture from destroying itself from within.

Thus it is more than morally imperative that men must now reflect on the conscious awareness that every woman carries with them on a daily basis: the likelihood that on some occasion they will be forced into an unwanted sexual encounter by a man who has the power to coerce their silence. As of October 2017 women in America have clearly stated: No more! And a growing legion of men is bracingly now standing with them. It is in fact a shared liberation.

Addendum. As a company we have made the decision to codify our own zero tolerance policy for sexual harassment. Members of our female staff are in fact finalizing the exact wording around this simple principle. Frankly, there should not be a single American company that fails to do the same.