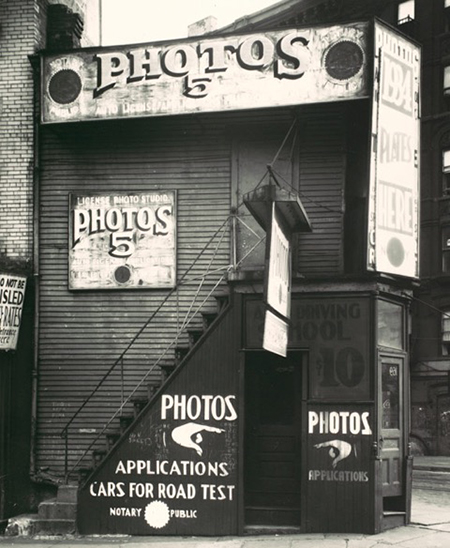 "The secret of photography is, the camera takes on the character and personality of the handler." —Walker Evans

The painter (and Depression-era photographer) Ben Shahn wrote, “Style is the form of content,” meaning that in the best art, the visual and conceptual (including political) elements reinforce and amplify each other. To the degree that there exists a schism between the optical/sensuous and conceptual/intellectual realms is, in my view, attributable to doctrinaire neophilia, love of the new, accompanied by art-historical amnesia about Dead White European Males. The heartlessness of much contemporary art, with cerebral PC propaganda on one end of the spectrum and escapist eye candy on the other, reflects the lack of an ethical center in American culture.

Today's political situation has, however, awakened many to the spiritual crisis engulfing us. It is heartening, amid all the doom and gloom, to note that the social documentarian photography of the Depression is once again on our minds. The images of Dorothea Lange — her "Migrant Mother" never lost its power or relevance — resonated with viewers at the Oakland Museum’s retrospective a few months ago. Across the bay, the San Francisco Museum of Modern Art has just opened a large exhibition of Walker Evans which promises to inform and elevate today’s huddled masses.

Evans is best known for his photographs for the Farm Security Administration of the rural South during the Depression. I have always gravitated to that work for its acute observation of the small-town American scene; its sympathy with the people portrayed (without sentimentality; and its elegant, sometimes witty compositions. Evans idolized French writers like Baudelaire and Zola, dating to his 1926 stay in Paris, and adopted the modernist detachment of the flaneur, or stroller; his curiosity about social reality is thus never strident or programmatic. One writer described his work as “stoic, reserved and minimal.” Evans, who saw himself as an “untethered eye” and a “social historian,” aspired to make images that would be “literate, authoritative, transcendent.”

Evans and FSA colleagues like Lange and Shahn inherited the earlier progressive documentarian tradition from Jacob Riis and Lewis Hine, and developed it according to the new social conditions, technological capabilities, and even career opportunities for photographers. Evans, for example, was the first photographer accorded an exhibition at the Museum of Modern Art; he was also active in publishing books: "American Photographs" in 1938, and "Let Us Now Praise Famous Men" in 1941. He worked for Fortune magazine as an independent editor/photographer from 1945 to 1965, before leaving to teach at Yale.

But back to the photographs. In contradistinction to contemporary art, which generally declaims its timeliness, Evans’s photos of the 1930s, are immersed in the past, saturated by memory, documenting the gradual disappearance of small-town America as mass culture penetrated even the lowly shanties of Appalachia. And so he preserved it, photographically. One critic, noting Evans’s debt to Eugene Atget (transmitted by Atget enthusiast and Evans’s friend, Berenice Abbott), characterized his work as “social fact[s], suspended in time.” Lloyd Fonvielle, in one of two Aperture magazine monographs on Evans, wrote:

"He appropriated the potent, head-on style of naïve vernacular photography and transformed it into an instrument of conscious elegance ... The visual incongruities of the American landscape — rusted auto bodies in a pastoral farmyard, rows of factory workers’ houses built up next two rows of tombstones, crude hand lettered signs tacked on to gracious (and crumbling) old buildings … This particular evidence of American innocence might almost be said to constitute the core of Evans’s vision; it’s certainly accounts for the disquieting, melancholy aura of his best images …"

In the second monograph, David Campany cited Evans’s interest in “… the poetry of the street, vernacular architecture and design, the way the past persists in the present, and the anonymity of modern citizens ... He was on the side of the genuinely popular, but against the populist (and often patronizing) manipulations of the mass media, with its love of product turnover, consumerism, easy stories, and celebrity."

These two writers sum up, with their evocative descriptions of the photos, Evans’ enduring appeal as both fine-art photographer and social documentarian: as an artist who perfectly merges style and content, and bringing to life the vanished past. The claims implicitly made by these photographs — for connection with the world; for high standards; for aesthetic independence; for cultural curiosity; for transcending mere artiness — seem to me to be a necessary correction to an art world too awash in a false sense of the new. I concude with a couple additional quotations: first Evans’ translation of “Mad,” an essay by the French poet Blaise Cendrars, which might almost serve as the photographer's credo, echoing William Carlos Williams: “no ideas but in things,” and is included in the SFMOMA show; and second, Evans’s Dutch-uncle exhortation to fellow artists:

"About this time, I was taken with a violent passion for objects, for inanimate things. I do not mean the utensils and the art objects with which the palace was stuffed, and which, by a sort of intellectual or sentimental exaltation, invoke, suggest, recall an old civiilization, some period of the past, some faded historic or family scene; objects which charm you and captivate you by their distorted shapes, their baroque lines, their obsolete refinement, by all that places them and dates them, names, and so curiously reveals the stamp of the mode which imagined them; no; my fancy was for unaesthetic objects exclusively; unfashioned objects of coarse and elementary material. I surrounded myself with the most uncouth things. A biscuit tin, an ostrich egg, a sewing machine, a piece of quartz, a bar of lead, a stovepipe. I spent my days handling and fingering and smelling these things. I rearranged them a thousand times a day. They were my amusement and my distraction; they were to make me forget the emotional experiences which had so tired me out. This was a great lesson to me."

Stare. It is the way to educate your eye, and more. Stare, pry, listen, eavesdrop. Die knowing something. You are not here long.