Whose Kickstart Was This Anyway?
Editors’ Roundtable
Column by James Yood 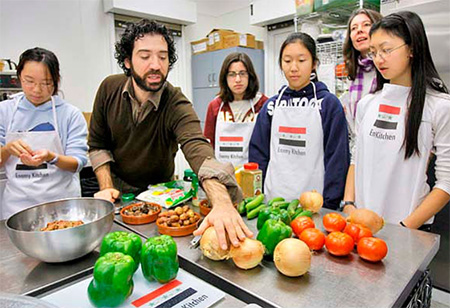 Hmm, what do you make of this? I was checking my Facebook page, when there it was — "Enemy Kitchen by Michael Rakowitz at MCA Chicago" posted as a Kickstarter project with a fundraising goal of $30,000. Some background: Rakowitz is a Chicago-based Iraqi-American artist of growing national and international repute. His first retrospective, "Michael Rakowitz: Backstroke of the West," organized by MCA Senior Curator Omar Kholeif, opened at the Museum of Contemporary Art in September, and will be up until March 4, 2018, almost a six-month run. The "Enemy Kitchen" mentioned in the Kickstarter appeal is, as the MCA states, "a pop-up food truck that serves Iraqi dishes made from recipes that Rakowitz and his mother collected through workshops and extensive community liaisons." Rakowitz debuted the piece in 2003, and considers it an ongoing project.

The text of the Kickstarter campaign rather breathlessly continues:
As the MCA prepared for "Michael Rakowitz: Backstroke of the West," it was clear that "Enemy Kitchen" was an important part of his art career and had to be a part of the exhibition. But there was a problem. After "Enemy Kitchen's" last food service in 2012 the truck was put into storage in the parking lot of Babylon, a restaurant in North Chicago. Despite being locked up, the truck was broken into, stolen from, and vandalized with messages of hate. Mechanically the vehicle would not start, aesthetically it was damaged, and wasn't up to preparing or serving food — "Enemy Kitchen's" situation was dire.

OK, some help and restorative attention seems reasonable here. $30,000 is a fair bit of money, but it isn't as if Rakowitz could have just tucked the truck away in a closet or drawer anticipating its re-employ. He had to surrender it to the cold and dreary streets and parking lots of Chicago, where stuff like theft, graffiti and other damage is occasionally known to occur. Even for a Professor of Art at Northwestern University (which he is), a school that is always ready to throw money at faculty who achieve things like a retrospective at the MCA, that's a pretty penny. So, that Rakowitz wanted to take to Kickstarter for this important salvage project is understandable. While I doubt I would have supported it financially myself, I understand the service that platforms such as Kickstarter perform, and, too, the generosity of the citizens of the art world.

And then it hit me: I'm not Michael Rakowitz's Facebook friend, and I don't think we've ever met. This Kickstarter announcement came to me via the MCA Facebook feed, which I do regularly receive. The Kickstarter project is from the museum, not the artist (though clearly with his acquiescence; Rakowitz provided multiple premiums — for a $15 pledge you got a "Saddam Hussein Replica Paperware 5-Pack"). It's the MCA that's asking for financial assistance here. The MCA is an institution that had, according to its own figures, a budget of $23 million dollars in 2016. $30,000 is about .013 percent of that budget). The MCA's 2016 budget for marketing, public relations and fundraising alone was 4.95 million dollars, 21.5 percent of their entire budget. The same week I received notice of its Kickstarter campaign, I was also informed of the progress of the MCA's 16 million dollar redesign project. It appears, though, that the MCA was unable or unwilling to find thirty grand anywhere else but through Kickstarter for this particular project.

Kickstarter is quite clear about what it does and for whom it does it:
"Kickstarter helps artists, musicians, filmmakers, designers, and other creators find the resources and support they need to make their ideas a reality. To date, tens of thousands of creative projects — big and small — have come to life with the support of the Kickstarter community."

The MCA is a lot of things, and in 2017, as it celebrates its 50th anniversary, I'm glad to express my appreciation for what I have enjoyed there over the years. But the MCA is not an artist, musician, filmmaker, designer or other creator. If the MCA is having difficulty securing adequate funding for its exhibitions, it can scale them back (it seems they are already doing so; there's no logical reason for the Rakowitz exhibition to be up for nearly six months; perhaps the MCA's next Kickstarter project should be to raise funds to host, you know, more exhibitions). Or it should appeal to its Board of Directors and other potential donors to lend a hand, or it should tightly squeeze its fairly ample budget until $30,000 miraculously appears. Or, best yet, it might have invited Rakowitz to do the Kickstarter himself, and then the MCA could have made a generous pledge to it on its first day.

I'm not arguing that the MCA has done anything immoral or unethical in this Kickstarter campaign. I'll let Kickstarter decide who gets to use its platform, and I understand the MCA is not the first major institution to take advantage of its services. But when I listen to my inner 'yes' and inner 'no,' mine winced and blushed at this. It appears unseemly to me, a grasping and inelegant gesture. If I can read the organizational philosophy of Kickstarter so can the staff of the MCA. Of course, you can guess how this turned out: the MCA's Kickstarter was successful; it raised $30,499 from 399 backers (that's an average of $76.43 per supporter; for a pledge of $75 you'll receive an "Enemy Kitchen" apron and recipes). I look forward to attending the Rakowiz's exhibition. But there's no rush, as of this writing I still have more than five months to get there. But to queue up on those days when "Enemy Kitchen" is open? No, I don't think so, I'll dine elsewhere. If not for Rakowitz, then certainly for the MCA, I think the food at that place may have cost a little too much.